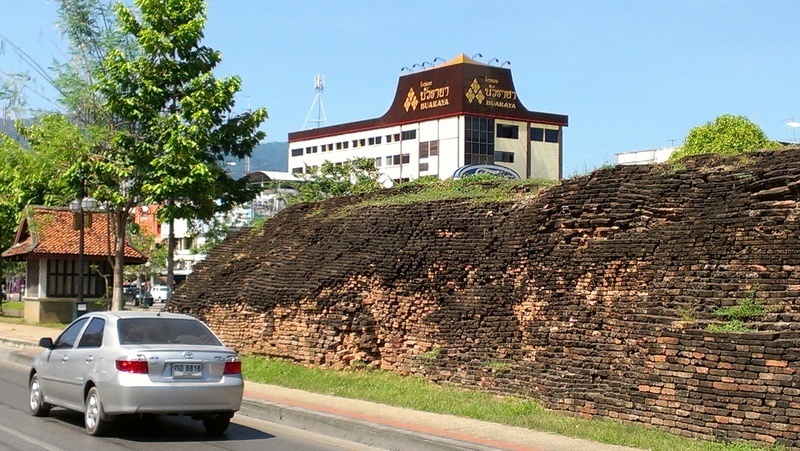 This is the first picture I took on my trip to Thailand of a spot that would interest tourists. It simultaneously shows the old and the new, part of the old wall in Chiang Mai in the foreground, and my hotel rising up above it, with the top of the Ford dealership sign barely peaking above the wall. I was purposely getting a picture of both. The Buaraya Hotel was the only hotel on my trip that I booked myself. I selected it before I started on my journey and I chose it partly because of its location inside the boundaries of the ancient walled city. I have a lot to learn about the history of the Thai people and when I took this picture, I knew less than I know now. But somewhere before I came, I read that there were these ancient walls in Chiang Mai, so I wanted to be close to them. And I was. My hotel was right across the street from the moat which was orginally built to run alongside the ancient wall.

It was built starting in 1296 (nearly two hundred years before Columbus landed in North America) to protect the Lanna Thai Empire from attack by their rivals to the north in Burma, centuries before Chiang Mai became part of the current Kingdom of Thailand. The brick wall formed a rectangle around the city which was 1.8 km wide by 2.0 km long. "Chiang" in the northern Thai dialect means "city," while "mai" means "new," hence Chiang Mai means New City. At that time it was probably called the new wall. More than seven hundred years later, it is the old wall around the old city and a tourist destination.

Many cities in the US have an Old Town section, a good name for encouraging visits from tourists and those with money to spend. In the US, "old" can mean two hundred years or less. Not here. In Chiang Mai, "old" is more than seven hundred years, and in other parts of Thailand, it is centuries longer than that. When you look at it, it is quite obvious that it is old, really old. So we stopped the truck and got out, looking and taking pictures. Looking to the right we saw a fortified top to the wall at the end of the block. 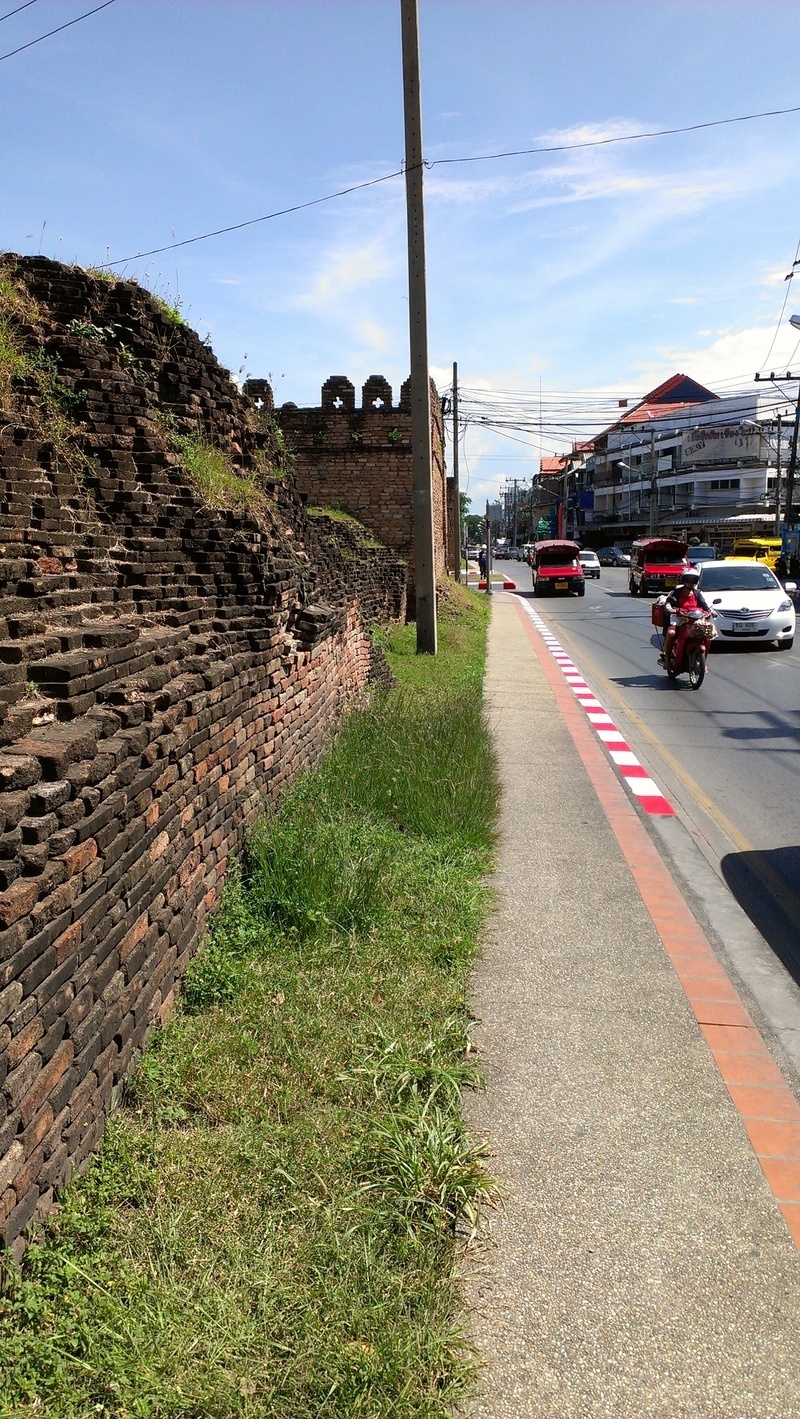 On the other side of the wall at that corner was this gate, labeled with a bronze plaque, Chang Phauk Gate. 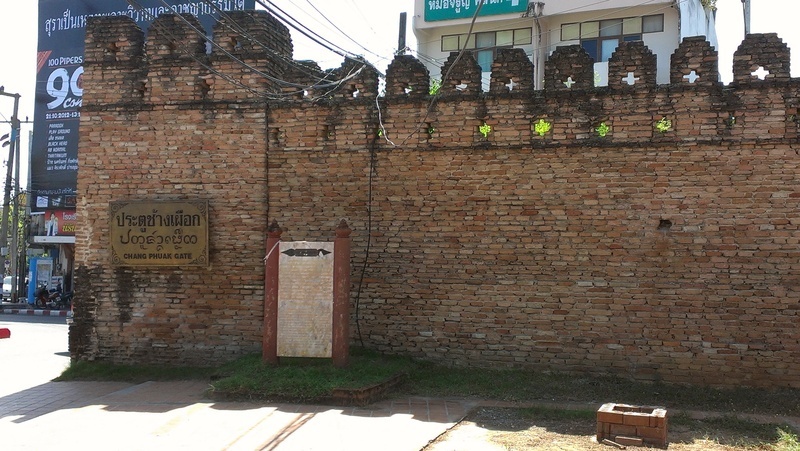 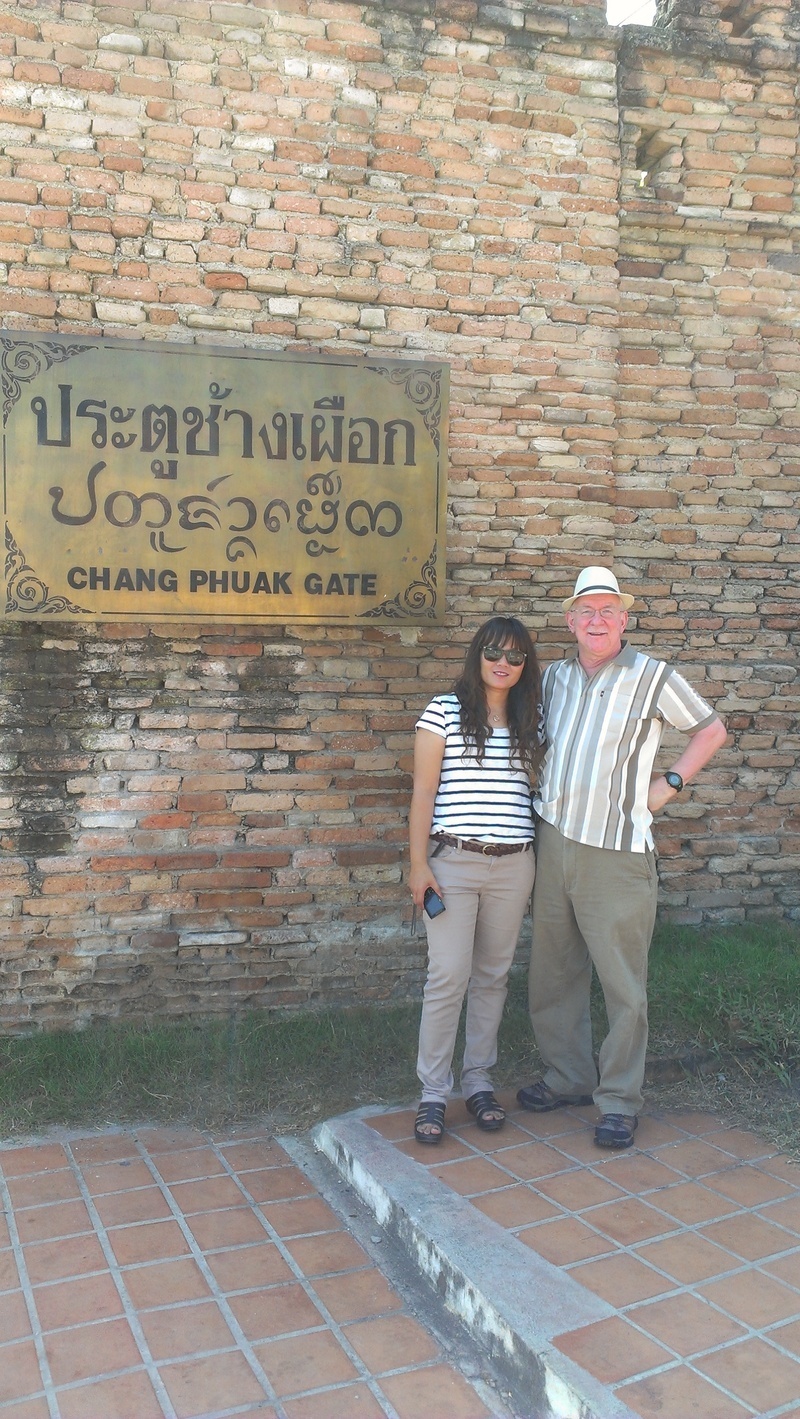 I had no idea what Chang Phauk meant at the time. When I looked to find out, I found one misguided soul who thought Chang was a mis-spelling of Chiang. Well, no! As I found out less than an hour after these pictures were taken, Chang means elephant, animals of huge importance to the culture and people of Thailand.
http://www.chiangmai-chiangrai.com/elephants_thai.html
Phauk means white, so this is the White Elephant Gate. In American English a white elephant is a unique, but not so useful, object not easily disposed of. At our annual holiday party, the CPA firm used to make a game of giving a white elephant gift (cost under ten dollars) to another staff member, with rules about how they could steal someone else's gift to avoid taking the one you had given them.
http://en.wikipedia.org/wiki/White_elephant_gift_exchange
Wikipedia says the phrase derives from the Thai culture. "The term derives from the story that the kings of Siam (now Thailand) were accustomed to make a present of one of these animals to courtiers who had rendered themselves obnoxious, in order to ruin the recipient by the cost of its maintenance."
http://en.wikipedia.org/wiki/White_elephant
There actually are albino elephants that are very white, or pink. They are very rare and long associated with the royalty in Thailand. Even today, the royal family in Thailand owns white elephants. And of course, elephants in general are regarded with considerable favor in Thailand and for good reason, as important as they have been in the history of the country.
There is a legend that the Chang Phauk Gate was given that name (originally Hua Wiang Gate) because the north end of the city was the head of the city and the king would enter the city through this gate on state occasions, riding on a white elephant. An albino elephant monument was also built on the north side. So this is a name of great honor, not with the connotation we have given the phrase back home.
Looking back toward the hotel from our spot in front of the gate, we got a look at the moat which used to be crossed on bamboo bridges, which were removed at night for extra protection. 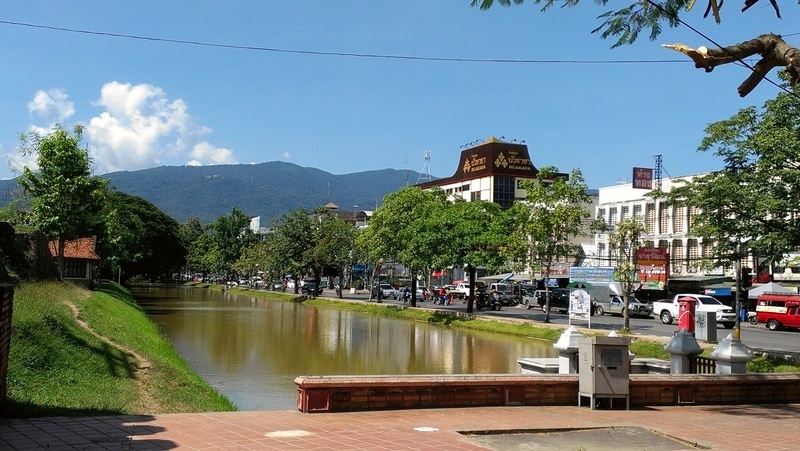 Without knowing it at the time, I had begun my adventure in Thailand by settling in the most important north end of the old city and then began my explorations right where the king would make his grand entrance into the city, through the most important of the four gates. I didn't know about these significances at the time. But I DID feel considerable excitement that I was embarking upon an important new direction in my life, an adventure worthy of my time and attention.