Here it is! Two schoolboys posing for their picture near their school in Bangkok, Thailand at the end of the day. 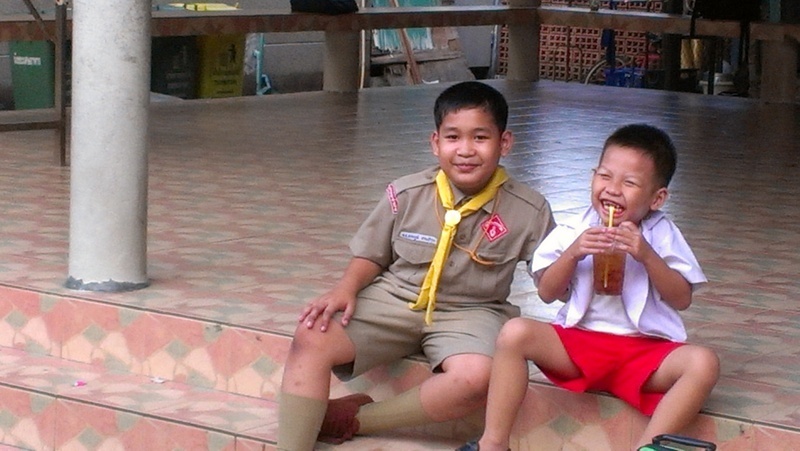 Here's the name of their school. 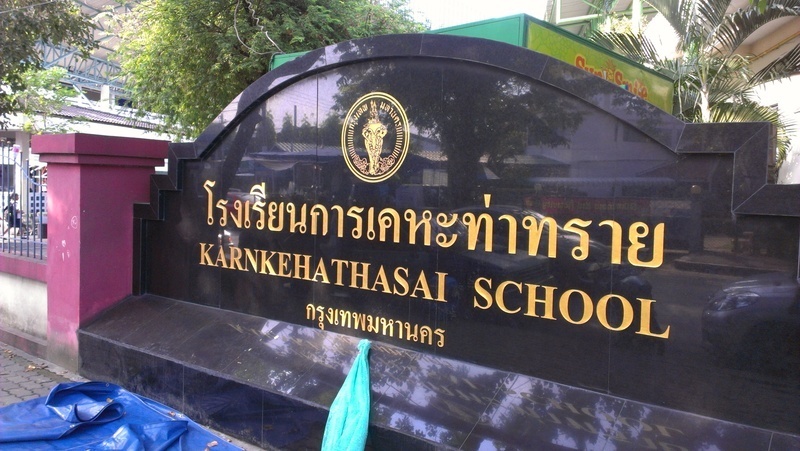 This school is less than half a mile from the DPU campus where I'm staying. I went out for a walk in the late afternoon and happened to arrive just as the kids were being let out at the end of their school day. This was a very orderly process. The kids were all lined up in their school yard, by class or grade, I suppose. Then one at a time a batch of kids would be released, with the busy street out front blocked for traffic, so they could cross. You can see the kids lined up in the next picture if you look carefully. 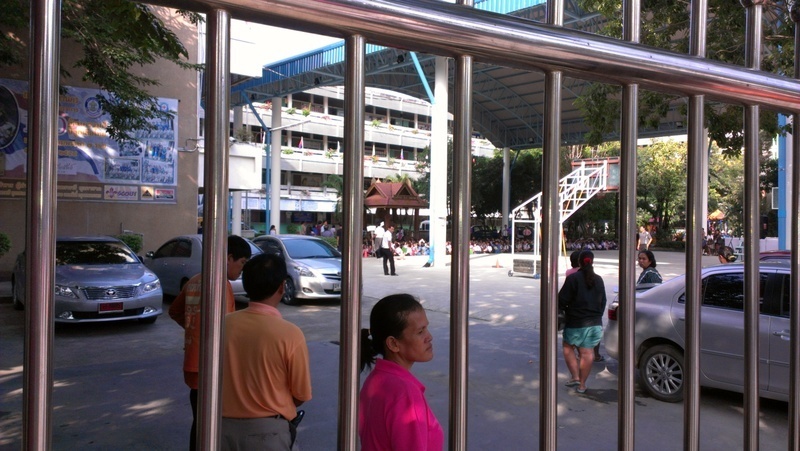 I stood and watched as hundreds of kids were released in this way. The kids were orderly, looked happy, and were going about their business. Most of them wore uniforms with white shirts and dark pants or skirts. But there were a small portion who wore what looked like Boy Scout uniforms to me. These fascinated me the most. I took a lot of pictures, but didn't get any real good ones of those uniforms. Finally I gave up and went on down the street to an open market, bought and ate some food and then headed back toward the DPU Place Hotel.A bit after I passed the school again, I looked to my right and saw the two boys in my picture. One of them was wearing the uniform that interested me. They were sitting and I thought maybe I could get a decent picture this time. I lifted up my camera and as I did, the larger boy saw what I was doing. He brightened up and smiled in approval, catching my eye with a little nod. I took the picture and immediately walked over to the boys and showed it to them. They were both excited and the larger boy said, "Thank you!" with a nod and an endearing look of genuine pleasure at having been selected for a photograph. It was a very pleasurable connection with an innocent boy living his life in this unique world.

ADDENDUM
I have since confirmed that I was seeing Boy Scout uniforms, or more properly uniforms of The National Scout Organization of Thailand, which was founded in Thailand in 1911, brought back from Great Britain by King Rama VI, who studied there. Thailand was only the third or fourth country in the world to establish Souting, open to boys and girls.

"Although Scouting is part of the school program, especially for grades 6-8, it is not actually mandatory. Options do exist for participation in other youth programs, such as the Thai Red Cross; however, the vast majority of Thai youth participate in Scouting. Scouts wear their Scout uniforms to school once a week, though which day of the week is set by the local schools."

So it seems like I might have been fortunate in picking the right day to pass by this school. I will add that I did see some young girls wearing uniforms that included the Red Cross emblem and other girls were wearing blue scouting uniforms. I was very active as a Boy Scout as a youngster and I'm pleased to learn that these children are getting the same fine training that I received as a boy, as did my brother and my father!

To this day, I can quickly recite this one I learned, as well as taught to others, in Scouting.
A Boy Scout is trustworthy, loyal, helpful, friendly, courteous, kind, obedient, cheerful, thrifty, brave, clean and reverent. Thai scouting teaches similar good values, although there are some differences in wording. One profound difference I discovered was the Motto. In the US, our Boy Scout motto was Be Prepared, one that still has an impact on me whenever I pack for a trip. But the Scout Motto in Thailand is quite dramatic, Better to die than lie. Oh my, a nation that teaches its youngsters such a principle in the school system is quite marvelous! http://n2zgu.50megs.com/THAI.htm