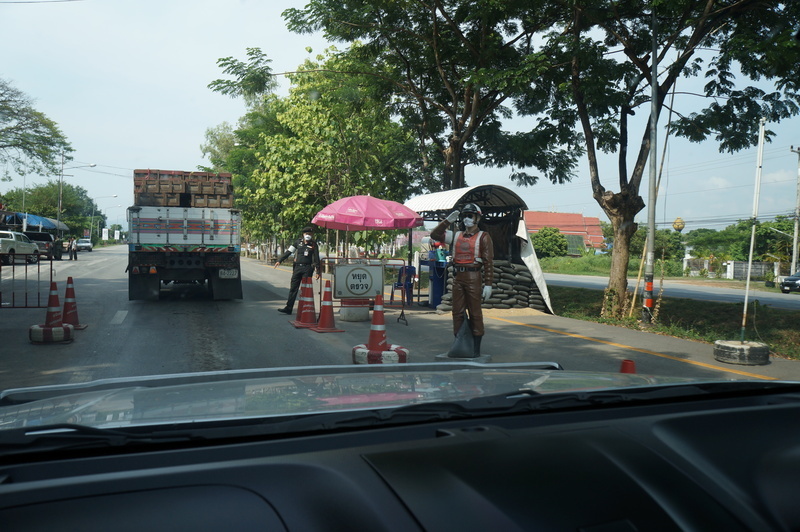 This was my favorite picture of the day. We were near the beginning of a nine hour drive from east of Lampang to Bangkok for Paula's monthly business meeting, when we came upon the third highway checkpoint that morning, an unusually high number. During the five weeks we drove around Thailand in the fall of 2012, we went through only three checkpoints and they were north of Chiang Mai near the Golden Triangle area, famous for its connection with illegal heroin imports from Myanmar and Laos. This time we had six in one day, three in the northern province of Lampang, two in the central province of Singburi and one other.

Paula said they were looking for heroin and it was the trucks that were being pulled over for a closer look. We never get much attention. One time an officer looked at her truck registration, which is on the bottom left corner of the windshield, to confirm it was current. One time she had to show her driver's license, which annoyed her. But this day she had to show neither.

Sometimes these checkpoints are unattended, two lanes narrowing to one with orange traffic cones and then a slow drive through the checkpoint, with a soldier saluting as you drive through. But the saluting soldier is a mannequin, which is a riot! I always try to salute back, if it's an unmanned checkpoint.

This third checkpoint of the day came upon us rather quickly and I had put away the camera. But I could see that it wasn't unmanned and got a sudden urge to get a picture. So I grabbed the camera bag and got the camera ready to go as quickly as I could. The truck ahead of us moved forward, the scene came into view, and I got this one shot with the camera.

The mannequin might not have noticed, but the live policemen saw his picture being taken, which was not my intent. No need to annoy them, you know? Seconds after the picture is taken, our truck rolls to a stop next to the policeman, Paula rolling down her window, and speaking with a chuckle in her voice to Checkpoint Charlie. Probably something like, "My crazy farang (foreigner) friend here takes pictures of everything. Ha ha." He's got a white mask over his face, just like the mannequin, so you can't see any facial expression to detect how he's feeling about this digital moment. He peers in through the open window at the farang. . . and gives a thumbs up! I nod and laugh, speaking nearly my total Thai vocabularly all at once, "Sawatdee Khrab!" Probably smiling behind that mask, he repeats what I said and waves us through. And we're on our way again.

I have found that one phrase to be a very handy one. It means "Hello" and "Goodbye" at the other end and always seems to elicit a pleased response from the Thai natives. There is a perfectly acceptable variation which has a P sound on the end, rather than a B sound, but I never use it, as it just doesn't sound very friendly to me.

I once asked Paula whether the Thai people like the Thai soldiers and she said they like the Thai Army very much, "But we don't like the police." I told her it was pretty much the same way in America. "Do the police use radar?" She knew what that meant and said that they did. "Did you ever get a speeding ticket?" No, she never did, explaining she always drives at 100 Km per hour. The speed limit is 90, so apparently 10% over is no big deal.

It is raining as we drive into Bangkok on a toll road that cost us 55 Baht. We have practically no traffic, zipping along at about 90. I notice these square boxes on the left side of a bridge we're crossing with a red electronic 40 being displayed in large numbers. I ask Paula, "What is that 40?" "Speed limit . . . usually 80, but because of the rain . . ." she says. "Oh, I see, that makes sense," I say. "Ummm, I don't notice anyone doing 40." Paula starts laughing, "No, no one!" a good summing up of the Thai attitude toward traffic regulations.