We had driven to Lampang on a Friday afternoon, did some shopping and picked up Paula's niece after school. While still at the mall, Paula started talking to someone from her "team" on her cell phone, the single longest phone call I ever heard her have. 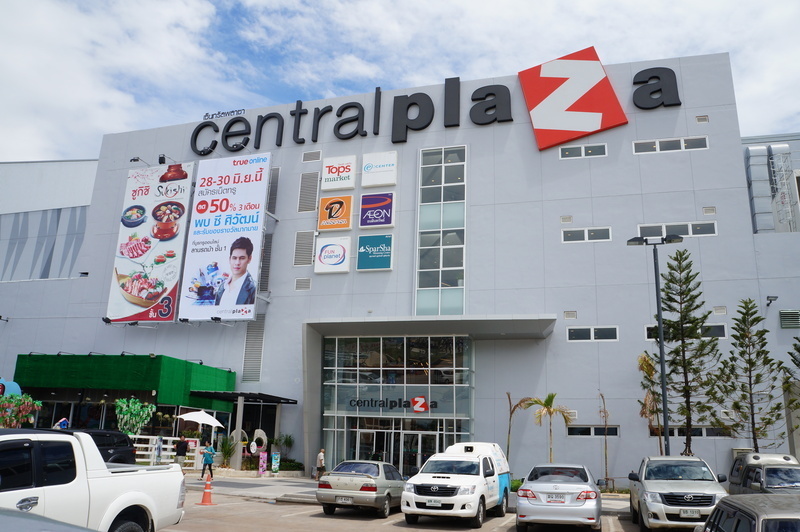 My plan was to get some pictures of her niece and the school, which I had never seen before. As we started out of the mall, I had seen a lot of kids walking into the mall and then later into the parking lot. They were all wearing the same uniform her niece had been wearing at 6 am that morning. Suddenly they were everywhere on the street too. They were pouring out of the white walls around a substantial building. It must be her school letting out! Paula is still talking on the phone, focused and intent.

I look across the street where the kids are pouring out and see a fairly tall girl with a full pony tail walking briskly in the same direction we are going. Ohhhh, it is her niece! I point at her. Paula nods, but doesn't miss a beat on her phone call, as she pulls the truck over to the left. Her niece has already crossed the street in front of the truck and is coming toward my door. I open it even before the truck rolls to a stop, she opens the door behind mine and climbs inside. The truck begins to roll forward right away, as the phone call continues to roll along.

And then I remembered the photograph. I had not gotten the picture of the school! I look to our right as the forward edge of the school perimeter slides by. I take one desperate shot out the back and side window of the truck, hoping to catch the large school sign on the outer wall, but it's too late. 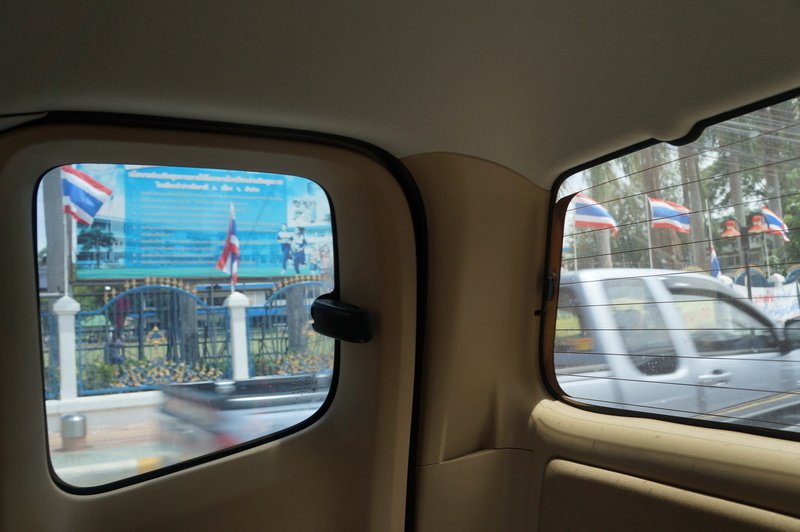 Paula moves the truck down the street, as her phone call goes on. She continues to deliver what sounds like instructions, not reprimands, to a much less experienced team member on the other end. It had seemed like a chaotic jumble of motion, kids going in all directions, vehicles everywhere, all against the backdrop of that urgent call. Yet in the face of all that, her niece had appeared, crossed the street and joined us inside the truck, like a laser hitting its target.

I turned around to say to her, "Oh my, that was like a CIA operation, a precisely executed maneuver, you know, like Mission Impossible or something!" And she responded as Paula oftens does to my conclusions, "Mmm . . . mmm!"

Cheerful as ever, Paula says what she often says to me, "Are you hungry?" "Yes," which is her signal to turn left into a parking spot next to a row of motorcycles. She kills the engine and I say, "That is the longest phone call I've ever seen you have!" She nods, saying "My team, big problem, not do what supposed to do, must fix it." It is already in the distance for her and she doesn't need my advice or concern. So I play it up by saying they should do what she tells them.

Suddenly she is practicing her English, while playing with me. "They don't and I am very angry, I am very upset!" She had learned those two lines a week or two ago from her English language instructional CD, in the section on "Terms of Disagreement." I told her to skip that section, thinking I don't need her learning how to say that stuff. Now she says it every chance she gets, but never with the real meaning behind it, always as a playful thing, like a parody of the screeching women on her favorite evening soap operas, the men always shrinking back.

We all climb out of the truck and follow her a short distance into a large restaurant with long wooden tables and wooden benches. We sit down and Paula is already giving the order to our waitress. I am seated across from the two of them, my attention drawn to a fish tank behind Paula's head. A garish and strange thing is moving around inside it. It has script in black written across its pink side. It is alien to me. It must be a radio controlled submarine, advertising this restaurant to its customers with that script. But it looks more like Japanese characters to me than Thai script. I ask,"Is this a Japanese restaurant?" "No, Thai food!" I stare at the thing, whatever it is. 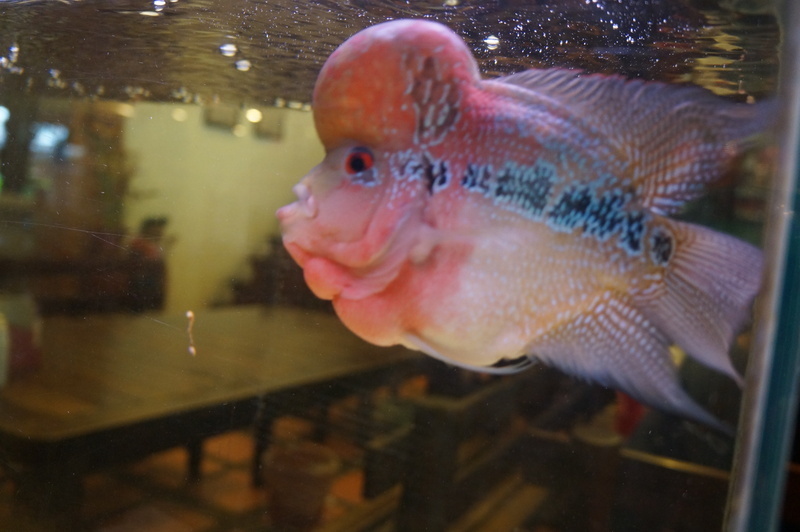 The food has arrived. We each get a bowl with eight or so servings of thin white noodles, rolled up in little balls, a little larger than ping pong balls, called Khanom jeen. There is a plate of vegetables to go with it, to be covered with a peanut sauce, a green curry sauce, and a fish sauce. There are also delicious pot stickers with the same peanut sauce and some small balls of pork, also on sticks. Some of it is spicy, but I eat it all, it is so good. When it gets too hot, I drink some Coke, the perfect ice cold drink to go along with Thai food. 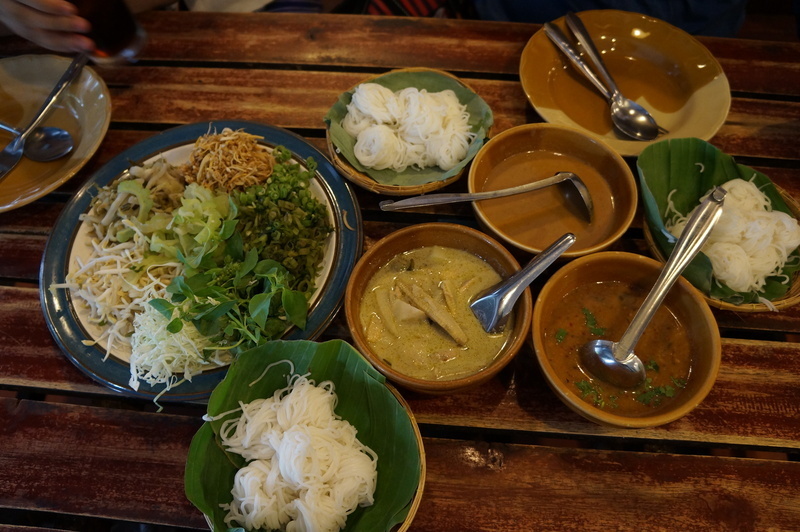 We all get very full, adding a third bottle of Coke near the end. The whole time I have one eye on that thing in the tank. Is it alive, or a robot, a creature from outer space? 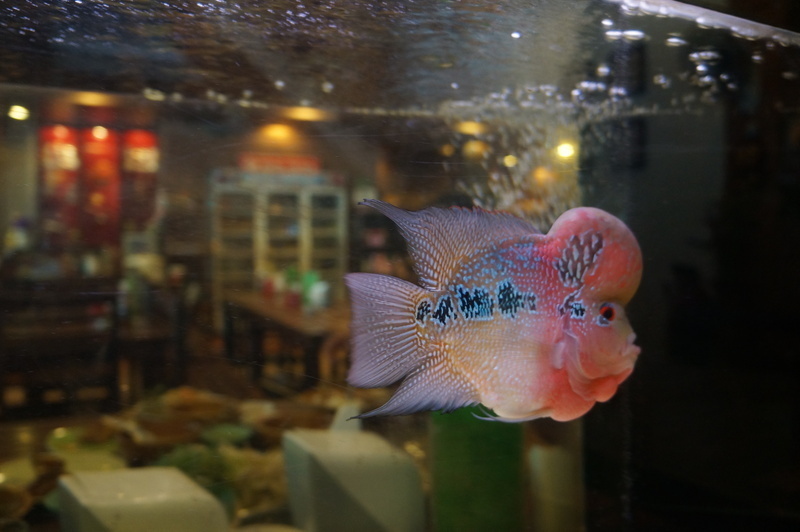 When we are done, the waitress comes over with her hand held calculator and tallies it up. I am expecting five to six hundred Baht. The total is 300 Baht. . . 300 Baht, or $9.94 US for the three of us to get stuffed! The three ten ounce bottles of Coke were ten Baht, or 33 cents US, each. With meal deals like this, why would anyone eat at McDonald's or KFC? Paula confirms that at lunch time the place is jam packed.

Before we leave, I walk over to the tall fellow in a blue polo shirt who has been sitting by the cash register. I figure he is in charge and will be able to tell me about the thing in the tank of water. He says it has no name, "No name!" Somehow I get him to understand that I mean the generic name, not the specific nickname for this one. He tells me, but I have to ask him to spell it and I write it down in my Moleskin notebook as he does.

I explain that I want to be able to look it up on the Internet, which he understands right away, opening his iPad on the countertop and doing a Google search for "Flowerhorn fish." He points and says, "Wikipedia page," as several images also appear in the search results. One of them looks exactly like the thing in the tank. It really IS a fish, not a plastic robot, or creature from outer space!  http://en.wikipedia.org/wiki/Flowerhorn_cichlid

I leave with a full stomach and an exciting new discovery in my mind.