If you travel around Thailand, you will see many small structures that are called Spirit Houses, or San Phra Phum.  http://www.thailandlife.com/thai-culture/spirit-houses-san-phra-phum.html

These will often have various offerings on them, such as garlands of flowers, burning incense, and various bottled drinks. In October 2012 a bottle of a red drink caught my eye on a lovely monument at the DPU Cultural Center on the campus of Dhurakij Pundit University in Bangkok. I had been walking and running on the track a short distance away on a hot day. I was very thirsty and I was sorely tempted to taste that red drink, but I managed to restrain myself, as it seemed to be there for a good reason, possibly as a devotional offering of some kind. 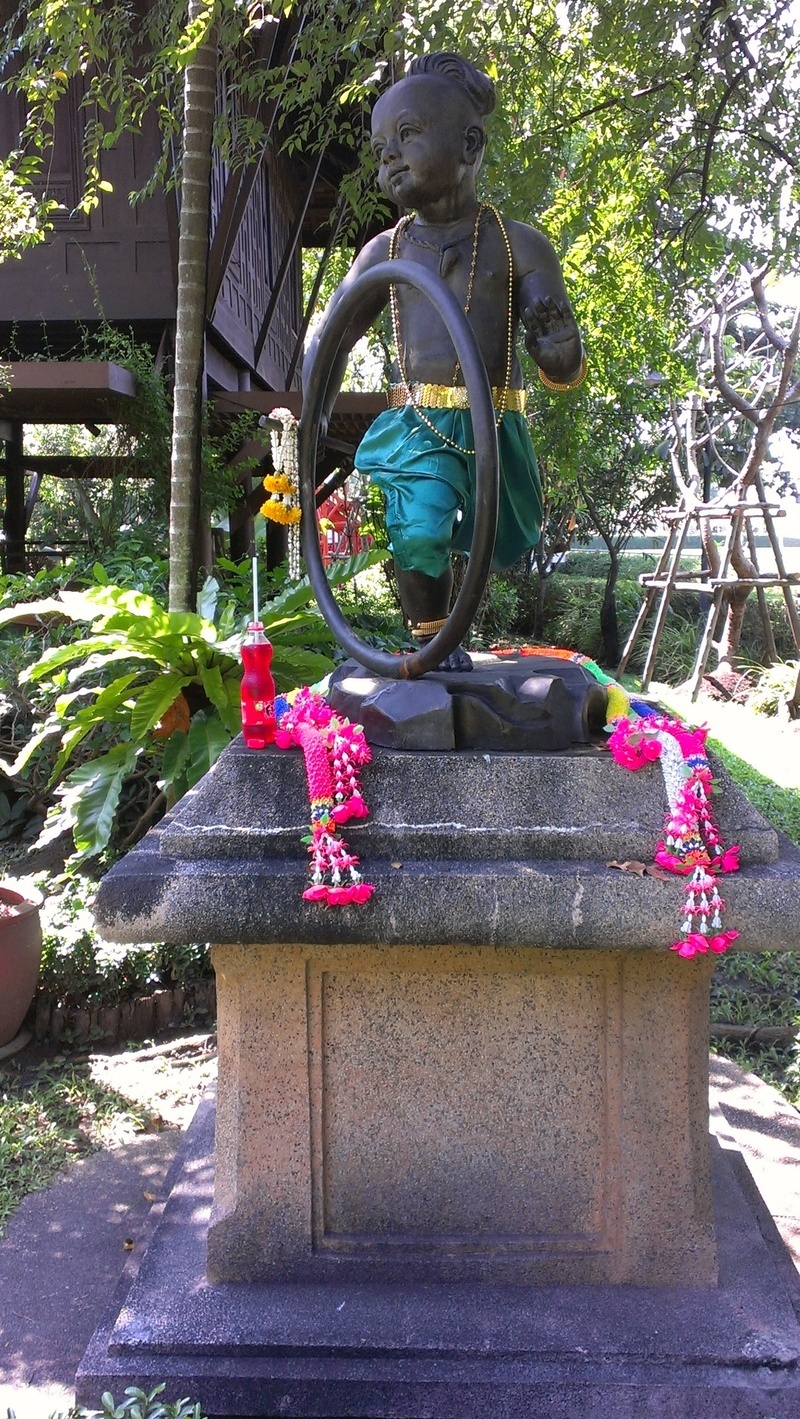 Just a few blocks away there was a business that had a small pond with a statue and the red drink was there as well.

This year when we stayed at the River Hotel in Nakhon Pathom, they had a pretty large spirit house and the red drink was there. 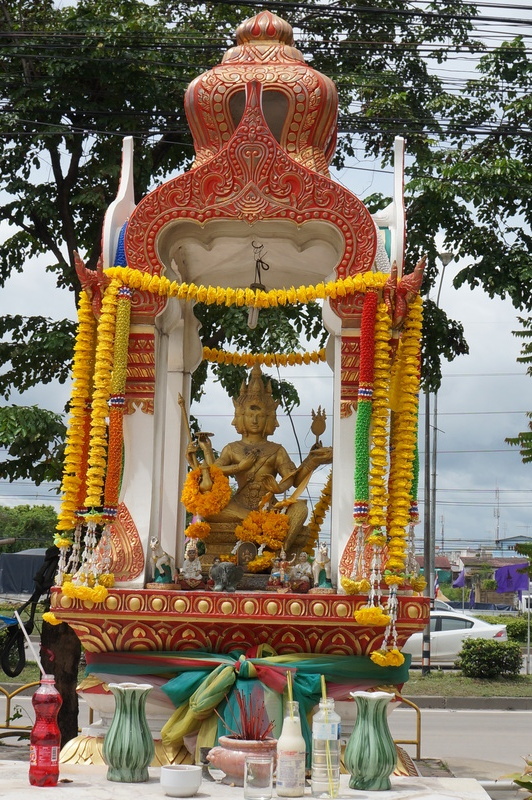 I walked around the block and found two small spirit houses. Each one had a bottle of this red drink. 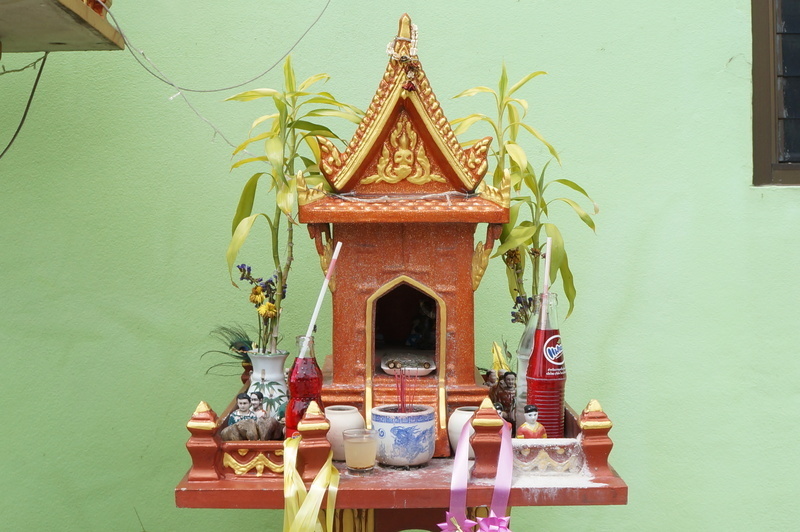 Quite by accident, I may have stumbled upon the reason for the frequent appearance of this red drink. Something had led me to an amazing Wikipedia page that lists the various flavors of Fanta sold in different countries. I was quite surprised to find such a huge variety of flavors, over 90 worldwide.

Fanta is a global brand of fruit-flavoured soft drink from the Coca-Cola Company. There are over 90 flavours worldwide; however, most of them are only available by region in some countries.

Note: As of September 2, 2012, Fanta is selling again in the country, After 10 years being unavailable in the Colombian market, with three new flavors Orange, Grape and Apple.

As is common in Southeast Asia, the sugar content of these flavours is much higher than those of the rest of the world, giving the drinks quite a different taste from that of similar flavours elsewhere in the world.

Of course as I scanned down the listing, I was drawn to the section on Thailand with five different flavors and nine retired flavors. Included in the active flavors is "Red Soda (sala) (This flavour is also not listed on the packaging, it is just called red soda or nam dang (น้ำแดง - literally means red water). The flavour is of the sala (fruit).)" I had already seen that these red drinks were in Fanta bottles, but I didn't know it was sala favored.

And here is the kicker, where it all fell into place. Wikipedia says, "Red Fanta has been officially endorsed by the King of Thailand as one of his preferred drinks. Consequently, glasses and open bottles of red Fanta are often seen as offerings on the small Buddhist altars displayed by every Thai home and shop."

If we can believe Wikipedia, this is the explanation of why the red drink shows up so often. It makes sense and I am inclined to believe this is the answer. There is only one small problem, which is the sweeping statement "the small Buddhist altars displayed by every Thai home and shop." This statement is false. I have driven all over parts of central and northern Thailand and I can assure you that every Thai home and shop does NOT have a spirit house. They are very common, but the sweeping generality of every is in error.

If we overlook this obvious error, I think the connection with the King of Thailand, Rama IX, is a very interesting one and seems very plausible.

When we spent a holiday weekend in Hua Hin, we enjoyed some sala fruit in another form, as a frozen dessert. The sala had been frozen in crushed ice and was served barely thawed at all. It was a hot day and that cold fruit and ice was very refreshing, but so cold that we were all having strong reactions as the coldness made its way up to our eyes and face. We were in discomfort from the cold, bordering upon pain, while laughing about it at the same time. My friends told me there are two different varieties of sala, one from the south and the other from the east in Thailand. We were probably eating the variety from the south. I have no information about which one is used in the Fanta red drink.

The frozen sala was not red in color. It had a light cream or yellow color, as I recall. Unfortunately I didn't take any pictures of that meal.

Eleven months after I originally posted this article, I had the great fortune of stumbling upon the real non-Thai expert on Thai Spirit Houses in Thailand, Marisa Cranfill. I first heard her in a fascinating interview in a Bangkok Podcast from 11 July 2011. It was clear immediately that she is an expert on this subject. Soon after, I found her website, which must be the definitive English language website on the subject of Spirit Houses.

In the podcast [at 25:00] she was asked about the red Fanta soda, upon which she said, "That's my favorite topic!" I then learned that the Wikipedia explanation above is off the mark. Here is what she said:

"Red Fanta is actually a symbol of blood. So this is where we get into blood sacrifice. They offer the pig's head and the chicken and the fish and everything else during the ritual when they actually put the spirit house in the ground. But you won't see these things offered unless it's a very special occasion. It's not a daily offering of a pig's head. But the Fanta is a miniature representation of blood or sacrifice. In the past, they actually probably did real sacrifice. This is a long, long time ago. But King Rama I banned animal sacrifice."

That sounds like the correct explanation, much more in depth than the Wikipedia explanation. There is always more and more that can be learned about the Thai culture!