The May 2014 coup d'etat in Thailand has given me a completely different perspective on Twitter. In a situation of political chaos, Twitter may provide the best source of up to the minute news about what is going on. This could provide a great deal of peace of mind, as well as very useful, even life changing, information about what is happening. 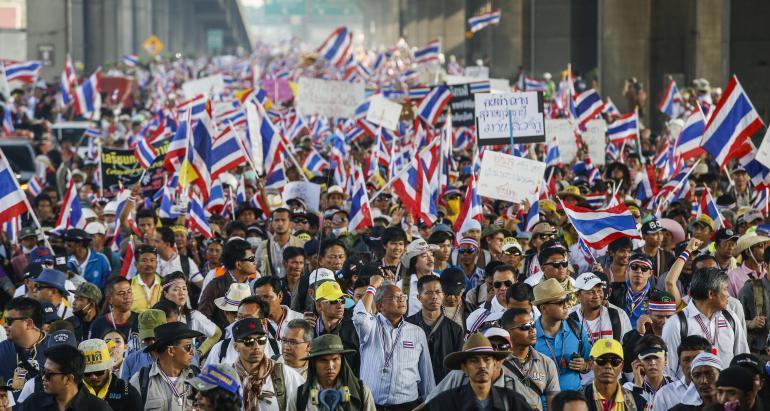 We were in Ayutthaya on 21 January 2014 when the government of Yingluck Shinawatra declared a state of emergency in Bangkok and its surrounding districts, which made it easier to control the people, such as being easier to arrest people. Two days later we were staying in one of those districts at our favorite hotel, DPU Place, just north of Bangkok in Nonthaburi. Only ten days earlier (on 13 January 2014) the anti-government forces of Suthep Thaugsuban had begun their Bangkok Shutdown in an effort to force the Yingluck government to step down and the state of emergency was her response to that pressure. And now we were within a short driving distance of the events unfolding in Bangkok. That night a rally for the anti-government forces was held a block or so away on the campus of Dhurakij Pundit University, the university where we were staying. There was high energy in the air, an excitement about what changes might be coming.

When I had time, I got news about what was happening by reading Twitter, especially the tweets of an English teacher from the UK who had been working and living in Thailand for over 17 years and was a very active blogger in Thailand, Richard Barrow. It was the first time I saw Twitter as a source of the most recent information about a rapidly changing series of events. Four days later, when I went to the Bangkok airport for my planned flight back to the US, the Bangkok Shutdown was still going on, but I had never observed any of these events directly, nor felt even the slightest bit of danger around me.

I was concerned about how this all might turn out, but I didn't have any concern at all for the safety of Paula, as I knew she would never go near the parts of Bangkok where these events were unfolding. For one thing, she hates the traffic jams in Bangkok. When I got back to Silicon Valley, I continued to follow the news in Thailand, mostly by following Richard Barrow and reading the articles that he pointed to in his tweets. 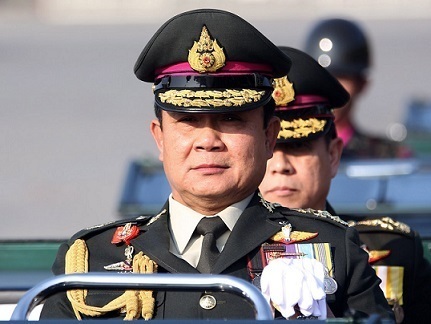 When I woke on Thursday morning, 22 May 2014, I saw that Paula had left me a message on Facebook, "Ron maybe we can't chat tonight." The coup d'etat had begun in Thailand four hours earlier. Normal television broadcasting had been shut down and a nationwide curfew was to go into effect in an hour and a half. When she left her message, she didn't know whether Facebook would still be working between Thailand and the US, hence her concern that we might not be able to chat.

Well Facebook was stlll working, so we were able to chat, in which she immediately reassured me about the coup, "Don't worry tee rak." When we finished, I went to read Richard Barrow's twitter stream and caught up on all the events that had happened while I was sleeping. Over the next few days, I followed Barrow closely and began to see that across most of Thailand the nightly curfew was the only change that was effecting most of the people of Thailand. Paula wasn't effected in any way by the coup, as the curfew began at 10:00 pm every night and she was in bed by then anyway.

And many in Thailand obviously did as I did, using their smartphones to get their news, in the absence of news from the usual media outlets, which had been disabled by the junta in power. A huge surge in modile data usage was recorded in the hours after the beginning of the coup d'etat. People were making effective adjustments to their changed circumstances.

I have been following events closely and learning a lot about Thailand in the process. And then yesterday I read a very sad story in the Bangkok Post. A reporter had gone to the Bangkok airport and found some tourists who had decided to abruptly end their holiday in Thailand and return home because of the coup. Wendy Berry had arrived in Thailand for her first holiday there just a few hours after martial law had been declared on 22 May 2014 and two days before it became a coup d'etat. Two days after that and she was at the airport, preparing to cut her holiday short and fly back to her home in the UK!

She had canceled her ten day trip to Krabi, one of Thailand's famous beach paradise vacation spots. She had not been able to send or receive messages with her family back home. “I can’t even monitor the situation here because I cannot access any sort of news. How am I supposed to know if things are going to get better or worse?” she asked.

I read this and felt very sad for her. She obviously knew nothing about Twitter. Richard Barrow had been posting tweets for days showing people enjoying their holidays in the many Thailand beach communities, always reporting that there was no military presence and they were having a great time. 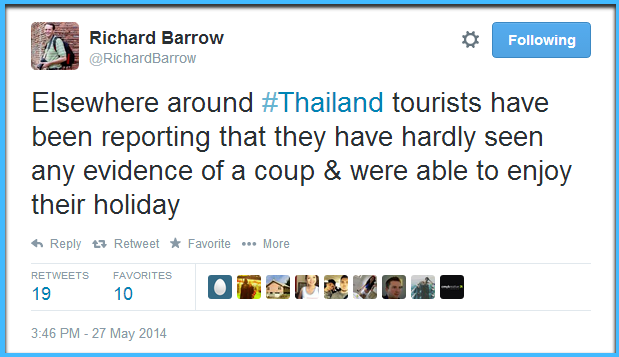 Ms. Berry's fears were completely unfounded, but she didn't know that because she apparently didn't know about Twitter and wasn't following Richard Barrow as I had been doing. If she had brought a smartphone with an Internet connection along with her, she could have been exchanging messages with her family via Twitter and she would have been reassured by all the news Richard Barrow had been posting on Twitter. 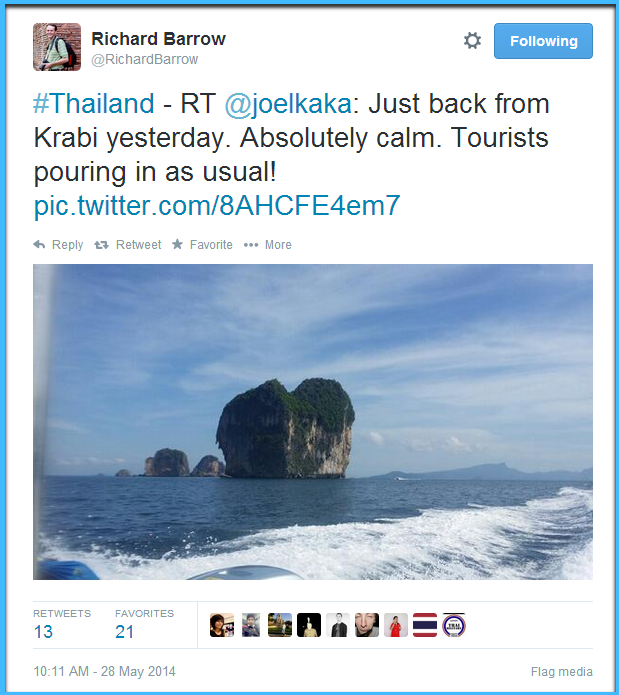 Suddenly Twitter no longer seemed like a nice convenience to have. I realized that it is an essential tool for travel, especially in areas of temporary chaos, where a lack of information and proper communication could cause people to make poor choices. Ms. Berry should have had her glorious ten day vacation in paradise. Instead she was very stressed and running in fear from imagined danger.

In Silicon Valley we have been taught for years how to be prepared for the Big One, the large earthquake that will inevitably happen in California. That doesn't mean everyone has taken the recommended measures to be prepared. But no one is in the dark about the advice that has been given.

The world has changed. Technology now makes it possible, even easy, for us all to stay informed about events around us, regardless of whether a coup d'etat or other events have rendered normal media silent. We no longer have to be in the dark, hoping to hear from the media elite who have told us about the world our whole lives. Now we can get much more immediate news directly from eyewitnesses to events that may matter to us a good deal. But we need to prepare a bit in advance to be able to do that. We must have a smartphone or laptop with an Internet connection, know how to use Twitter, and know who or what hashtag to follow.

In this case, Ms. Berry just needed to follow @RichardBarrow or #ThaiCoup to have a flood of news about the events going on around her. This would have changed her life for the better. Instead of fleeing in fear, she would have been able to enjoy her ten day vacation in paradise. She might have had a relaxing time at the beach, while reading about all the exciting events happening at the same time in Bangkok. What stories she would have had to tell her friends back home! 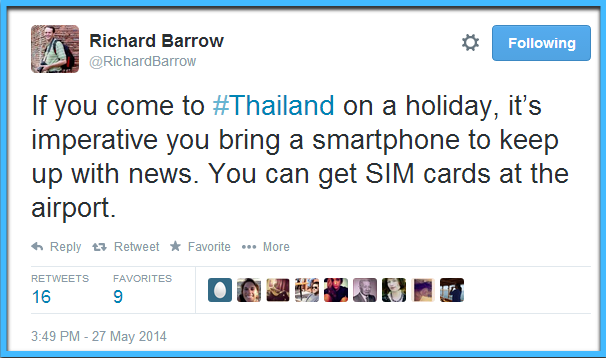 One day I will have a home in Thailand, an exciting place for friends to come visit. When I tell them what to pack for their trip to visit us, the first item on the list will be a smartphone or laptop with an Internet connection and I will make sure they know how to use Twitter and how to reach me on Twitter (@W6AZ).

I expect this to become standard advice for people traveling in our new modern world.

UPDATE one week after the junta first took control in the country. . . 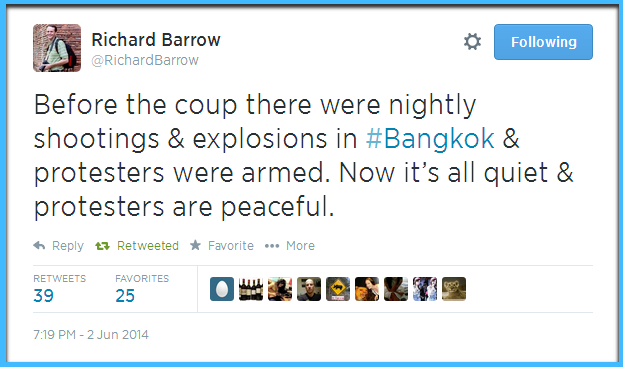 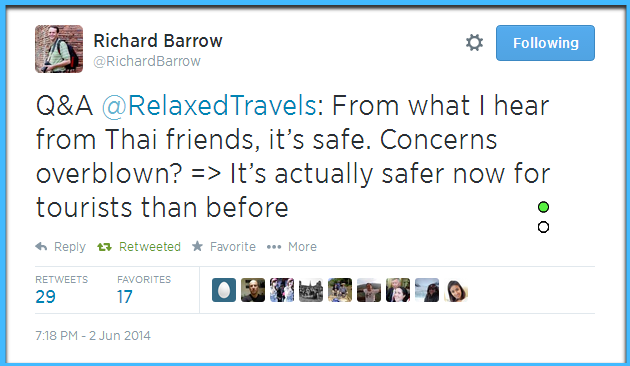 Here's a link to a newspaper article that sums up the current situation . . .


It is clear that the actual facts are that it is safer in Thailand now than when I was last there in January 2014. At that time tens of thousands of protestors had been protesting on the streets in Bangkok and sleeping there overnight for many months. Some people on both sides were armed with guns and around twenty people had died, with far more non-fatal injuries on top of that. (Many more than that had died in the protests of 2010.) The violence has now been ended by the soldiers, on orders from the junta. The worst consequence for me as an American is that the US State Department responded to the coup by issuing a travel warning, saying Americans should not travel to Thailand on any non-essential business. They had no such warning in place when it was actually more dangerous on the streets of Bangkok in January to May 2014. So this was just a political statement based upon the "theory" that a coup d'etat is a bad thing, as it curtails some freedoms of a democracy, not based upon any facts about the relative safety in the country. The consequence of their statement is that I might not be able to get travel insurance to travel to Thailand until they lift that warning. This does not make me very happy with my own country!

Call It What It Really Is

It should not be called a travel warning, as there has actually been no increase in the risk of travel in Thailand, quite the opposite. It should just be called a political statement by some politicians in America about how they think the Thai people should run their country. A rude action at best. I would prefer for the American politicians to concentrate on running our own country and to keep their nose out of Thailand's business. I'm quite certain that the majority of the Thai people would agree with my suggestion!
A note about the history of Asia. Thailand is the ONLY country in Southest Asia that was never colonized by a European power. They've shown that they don't need outside advice or control. Leave them alone to sort things out on their own!