"Maybe you should give me a Thai nickname," I say to Paula. "Noooooo!" she says, "You already have Thai name." Hmmm, news to me. "I do? What is it?" She says, "Rrrrrrron!" rolling the R, thereby making it sound almost royal.

I could never learn to roll my R's. How in the world is that done anyway? I ask her and she does it again, but she can't explain how she's doing it.

Okay, major side track here. I read what I just wrote and then thought, "What would a Google search turn up." So I searched "how to roll an R." Oh my, a lot of hits! The first one I pick is an eight minute long video in which a nice girl is verrrry specific about how to go about it. She gives some tricks to try. I try them and Oh My God, I roll an R!!!! Before the video is over, I'm saying "Rrrrrrron, Rrrrrrron, Rrrrrrron!" my R's rolling, until Paula looks up from her computer and over towards me, like I'm crazy. What an excellent instructional video!

Wow, I didn't expect that! Anyway, back to business here. So Paula tells me she's known Thai people named Ron, and the word means "hot," as in hot weather, not as in being really fashionable and bleeding-edge cool. Okay, so I already have a Thai name and it's pretty appropriate for my adventures in Thailand: HOT!!

But don't come to Thailand for hot showers. You might be disappointed. You can't always count on a hot shower in Thailand.

The last time we were in Singburi, we checked into our usual hotel there, a fairly large (80 rooms) modern hotel built pretty recently. We had stayed there several times and always had hot showers. But this time the shower was lukewarm at best. It was a surprise, so I went back down to the front desk. "We've got no hot water!" Someone will be up in five minutes. A young fellow appears at the door, goes into the bathroom and starts running the shower. Soon he and Paula are talking together in Thai. "He got it fixed and wants you to go in there and check it." So I go in the bathroom, he steps aside and I stick my hand in the stream of water. Lukewarm at best! I laugh out loud. "Not hot! That is lukewarm at best!" Paula tells him what I said. Ohhhh, he is sorry. He will get us another room.

We wait a while, but don't go to the trouble of gathering up our bags just yet. Then the house phone rings and Paula is talking with the front desk. "He checked some other available rooms. They're all the same. There's no point in our moving." So we had lukewarm showers, at best. Brrrrrrr. 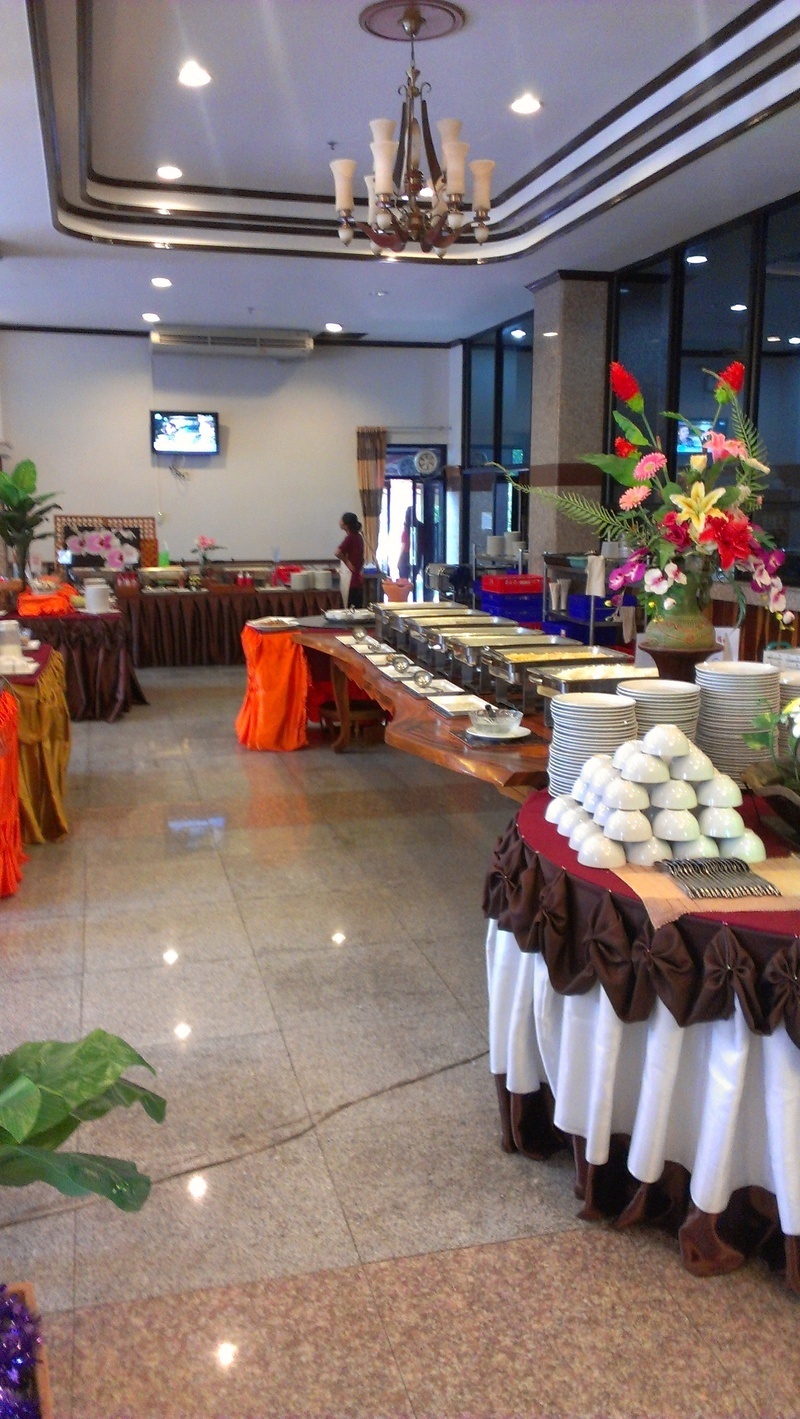 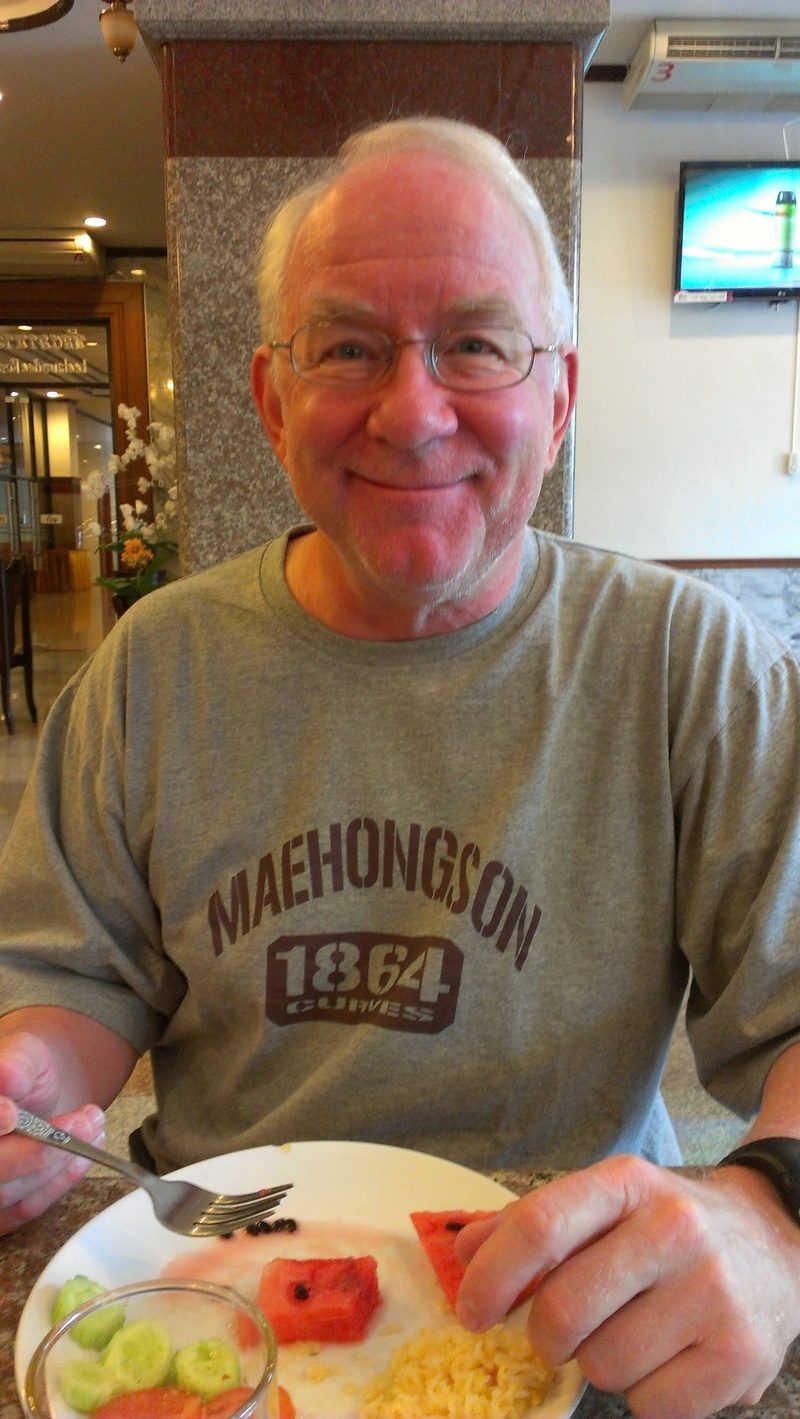 The next day I went downstairs for their extensive all-you-can-eat cooked breakfast: Thai dishes, rice, soup, cooked eggs, cereal, toast, juice, milk, coffee, cocoa, the works. It only runs until 10:00 am and I didn't want to miss it. It's included in the 700 Baht per night ($24) room rate, tasty and very filling. With a full stomach I go back upstairs for my lukewarm shower.

I run the shower water while I shave, hoping to warm it up and dreading the lukewarm water. I get in the shower and it's hot! Nearly scalding hot, if I'm not careful. 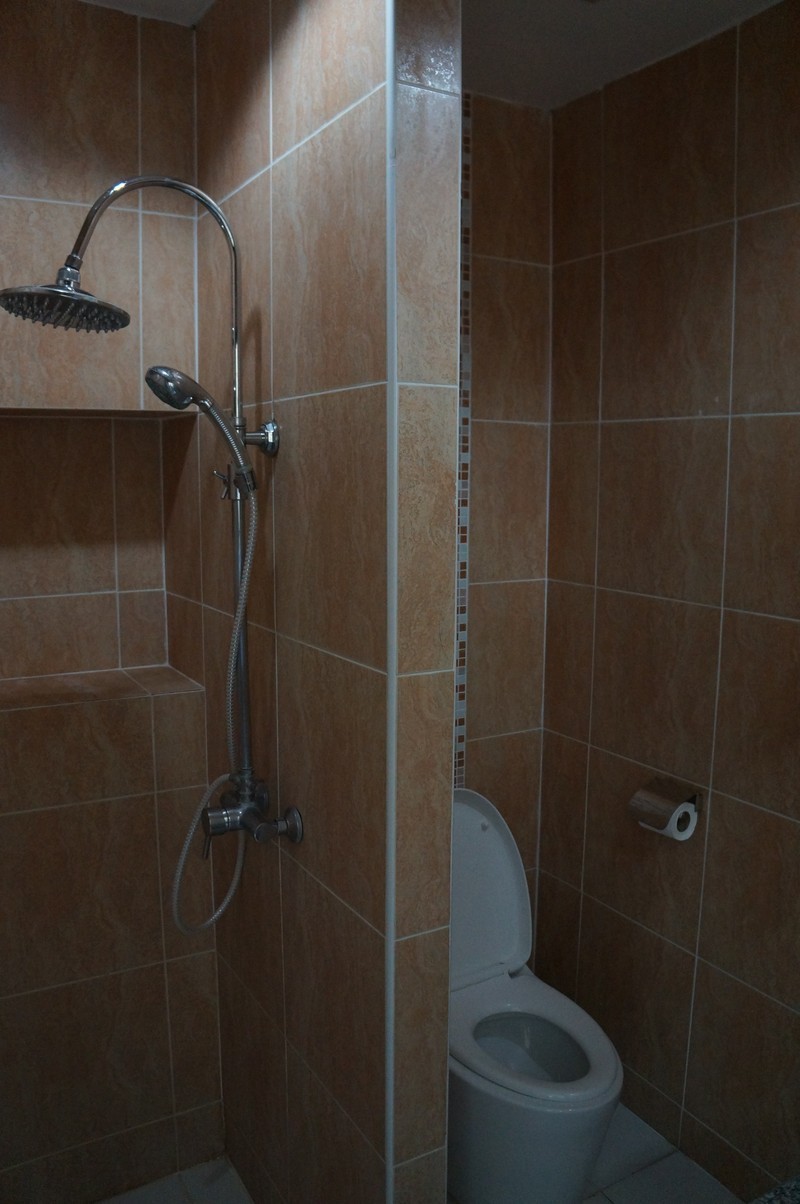 A couple of weeks later we go to Kanchanaburi for the weekend and get a room in an even newer hotel, decorated nicely with a pretty great looking shower (above.) We arrived before noon and I'm already looking forward to a loooong hot shower. At the end of the day, Paula goes in first and comes out with a frown, tightly wrapped in her towel. "No hot water!" she warns. Sure enough, another lukewarm shower. In fact, so cold that I don't even get my hair wet, both that night and the next morning. (Don't tell Paula. She expects a full cleaning.)

On Sunday, after our second lukewarm showers, we went off for a full day of sight seeing adventures. We get back about 4:00 pm, happy but hot and sweaty. Paula hits the shower immediately and comes out beaming, "Very hot!!" Sure enough, the water was extremely hot! The lukewarm showers came with the temperature controller all the way to the left, about 8:00 on a clock face. Now it can't be turned past about 4:00 without the water being much too hot. A day late, but I finally got my loooong hot shower, on my third try.