Fortunately Paula's mother saw it first, early in the morning in the side yard, while I was still sleeping. 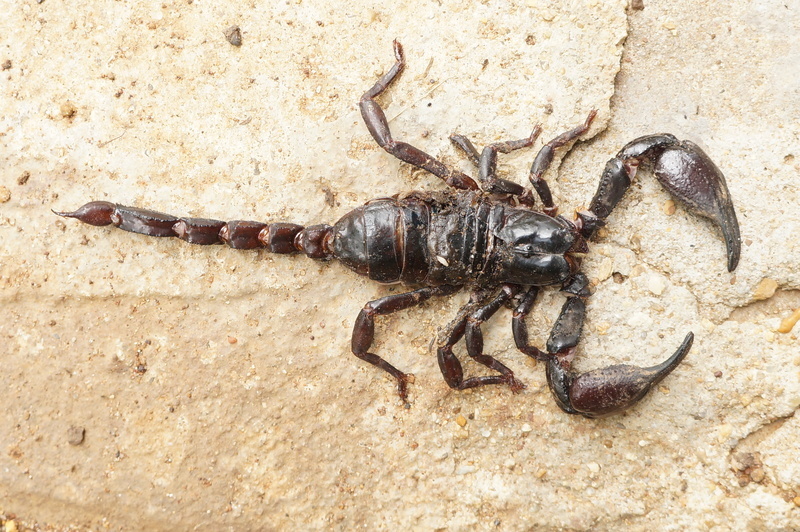 It was pretty large, as long as my mechanical pencil. She got a garden tool with a long handle and bonked it pretty hard. Which made it an ex-scorpion. 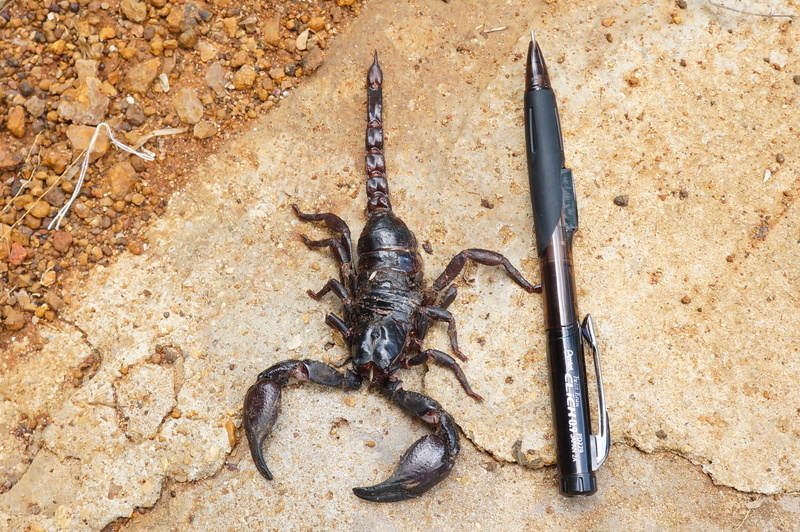 The next day, Paula's cousin and her husband came by to visit. We were all gathered around the large wooden table near the stairs to the upper floor of the house, which is close to where I had put the ex-scorpion to be photographed. So the subject came up, especially because Paula's cousin is an experienced emergency room nurse. She is the one who gets on the radio to tell the ambulance workers what to do before they transport people to the hospital. So she had seen a lot of people who had been stung by a scorpion.

I tell her about how I am allergic to bee stings and how my whole body got red and swollen when a number of bees stung me early one morning on my paper route. "So if a scorpion stings me, will I die?" "No, you won't die," she says and describes some things they do for scorpion stings. The only part I recognized was CPR. Now I'm getting worried, in spite of her reassurances. Her husband tries calming my nerves by saying, "No, you won't die, but you might need to sleep for seven years or so."

Then the ER nurse, the expert, gives me the important piece of information. You need to tell the medicos what happened. But the Thai language is not the same everywhere, there are different dialects in different areas. In Bangkok the word for scorpion is แมงป่อง, given by Google Translate as mængp̀xng, but pronounced as mang-pong. But in northern Thailand, like Lampang, an ambulance worker might not recognize mang-pong. There, you need to say mang-wow, if you want them to understand it was a scorpion.

"You mean, they might not know what to do, if I say mang-pong in Lampang?!"

"That's right, say mang-wow in northern Thailand." So I practiced both sounds to make sure I was saying them right, prefaced with "I've been stung by a . . . " and ending with "CPR please, right away!" Laughs all around, but I'm thinking, "Will I really be able to remember?" Maybe I better keep that garden tool nearby.  http://www.mayoclinic.com/health/scorpion-stings/DS01113

Then again, being allergic to bee stings says nothing at all about possible reactions to scorpion stings, as they are completely different venoms. http://www.youtube.com/watch?v=7C22Fshhe-Q