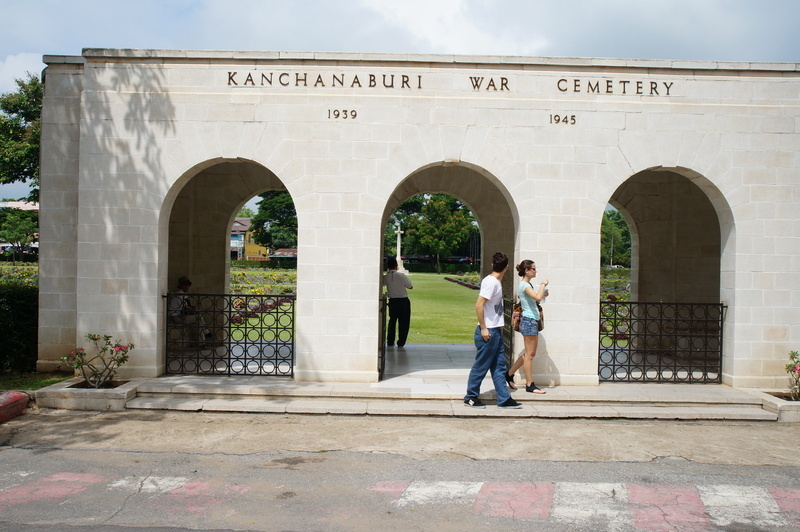 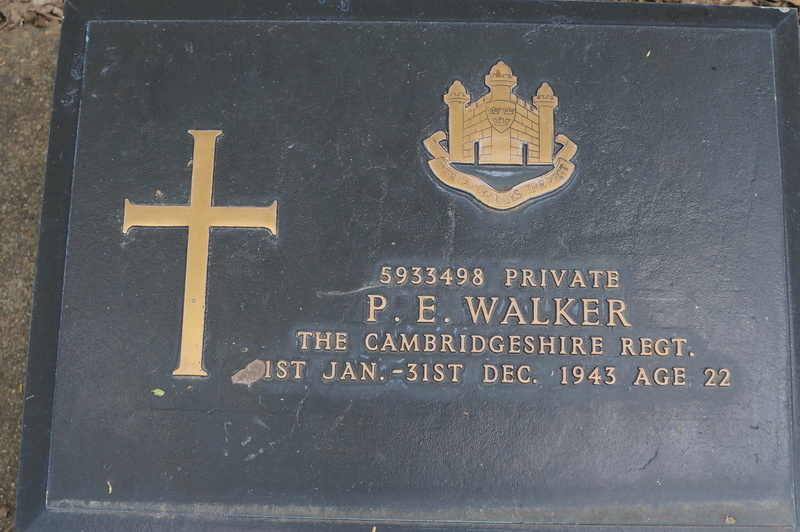 Once inside, the very first row of gravestones we saw had a powerful impact. Each one reported the age of the soldier whose ashes were interred there: 22, 24, 21, 23, 22, 20, 23 and on it went. None of them were over 25, just kids really, and here they were lined up far from their homes, their lives cut short, very short. And as we learned later, these were not kids who died suddenly from a bullet or explosion in war, with it all over in a moment. Instead they suffered terrible abuse and died slowly from disease caused by their mistreatment by the Japanese military forces.

This was no exciting story of adventure about a bridge. It was the story of thousands who died while being forced by the Japanese to build what is now called the Death Railway, a 415 km long rail line between Burma and Thailand, a vital supply line for the Japanese in their effort, largely successful at the time, to dominate Southeast Asia during the war.

This was not ancient history. Most of them died in the two years before my birth and many of them could have been still alive today, though old, if they had not found themselves as prisoners in this brutal tale. In their article on the railway, Wikipedia says,  "About 180,000 Asian civilian labourers (mainly romusha) and 60,000 Allied prisoners of war (POWs) worked on the railway." We were visiting the cemetery for the POW's who died. 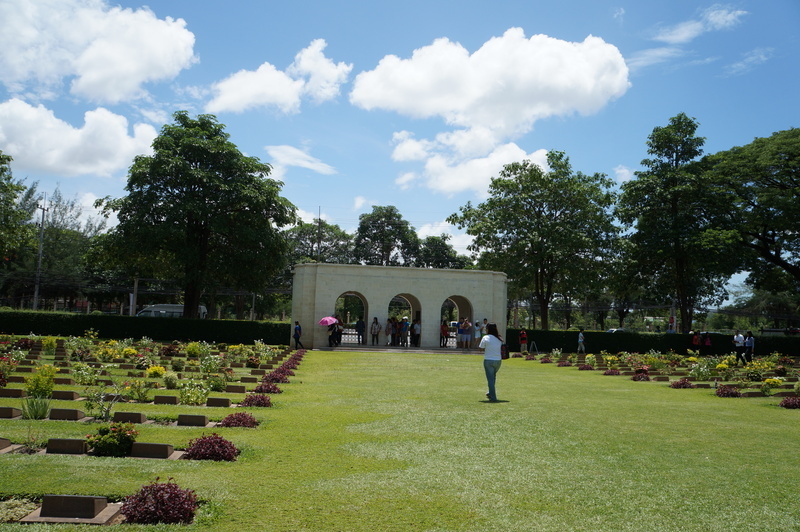 As we looked about we were immediately struck by the meticulous care given to these gravestones. They were lined up with the precision of a color honor guard of soldiers in perfect formation. But there was more. There were small, live, flowering plants growing between a large percentage of the gravestones. While we were there, we saw two gardeners at work, keeping everything trimmed and in its place. A small sign asked that people not step on or over the gravestones. Everything about the scene spoke of great respect for these dead soldiers.

As we walked about, we discovered that the soldiers seemed to be interred alongside their countrymen and together with others from their units. The first young men had been Australian. Soon we came upon a large section of Dutch soldiers and many of them had been in their thirties in age, a few in their forties. And then there were the British. We didn't see any Americans, their remains having been removed to Arlington Cemetery, or other military gravesites in the US. 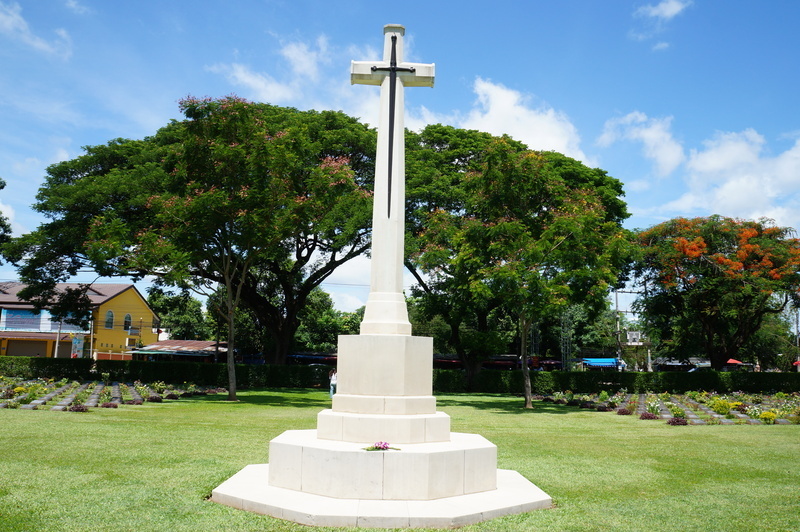 In the very center of the cemetery was a large, limestone monument in the form of a cross, but with no written inscription that we could find of any kind. On the face of the cross was a bronze broadsword, blade down. A small bouquet of flowers had been placed at the foot of the monument, likely just that morning. From what I observed, it is my guess that a fresh bouquet of flowers is always there. With no words, the monument spoke clearly, in a land that is 95% Buddhist, to the Christian background of the men who were buried in this cemetery.

I kept marvelling at the fact that the Thai people were keeping this cemetery with such care and respect. As we went to leave, this time through the entrance archway, I discovered the key to this care. 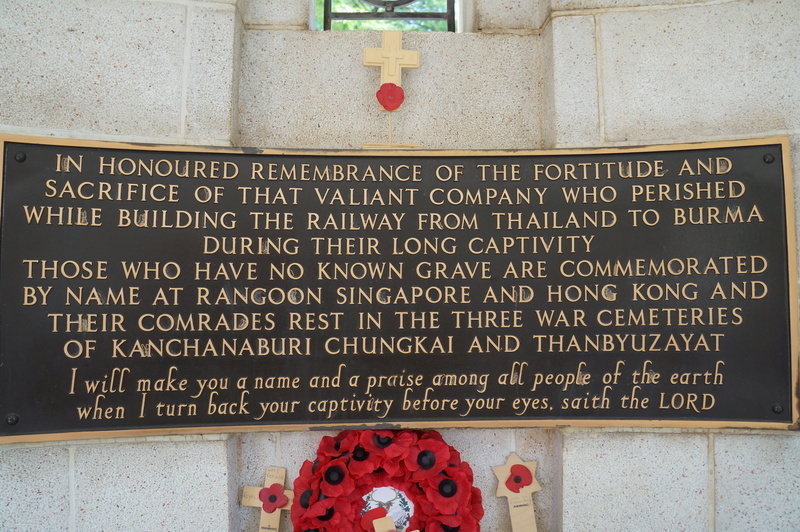 The site is maintained by the Commonwealth War Graves Commission, which cares for the graves of 1.69 million deceased Commonwealth military service members in 150 countries and 23 thousand burial sites around the world. I'm here to tell you, they're doing a great job in Kanchanaburi, Thailand! At their Wikipedia page we also learned that the cross we admired is called the Cross of Sacrifice and is often placed in cemeteries maintained by the Commission.

We stepped back onto the sidewalk outside the cemetery and almost immediately bought a sixty page book about the history of the Death Railway and the Bridge on the River Kwai. We wanted to know more and a young Thai woman had positioned herself perfectly to provide us with additional information. 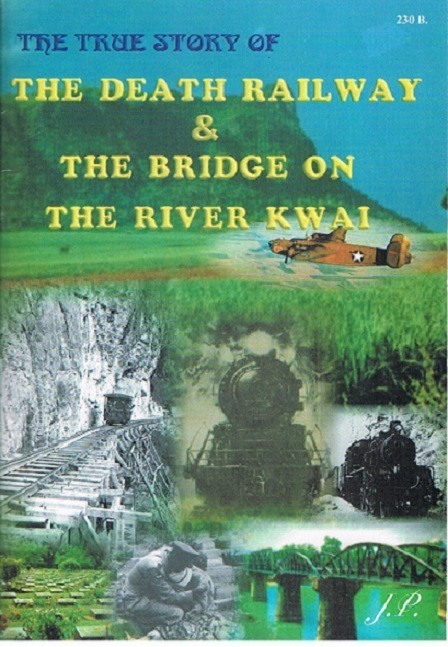 It had been a moving experience to explore this cemetery. Anyone visiting Kanchanaburi would be well advised to visit this site, and I would encourage them to see this before going to the famous bridge nearby. Read about the nearby museum for the next phase of our explorations into the WW II history of the Kanchanaburi area.