Nakhon Sawan, which means Heavenly City, is nearly 240 km due north from Bangkok. It is the capital of Nakhon Sawan Province. The provincial seal shows Wiman, a mythological castle located in heaven. Driving north from Bangkok, when you reach Nakhon Sawan you have just left Central Thailand and have entered Northern Thailand. This is an important demarcation line for me, as I prefer Northern Thailand. One obvious change you are likely to notice is the traffic begins to gets lighter as you continue north.

The entire drive from Bangkok, the terrain has been level, mostly covered with rice fields, often amazingly bright green rice fields. Suddenly about 45 km north of the city, you come upon an impressive sight to the east of Highway 1. A limestone mountain range, 282 meters high, rises above the plains, called Khao No-Khao Kaeo. It actually looks like two distinct mountains bursting up from the plains. Paula told me one is called Khao No and the other Khao Kaeo, and a local resident has now informed me that Khao No is on the left and Khao Kaeo is on the right, as you face them from the highway. 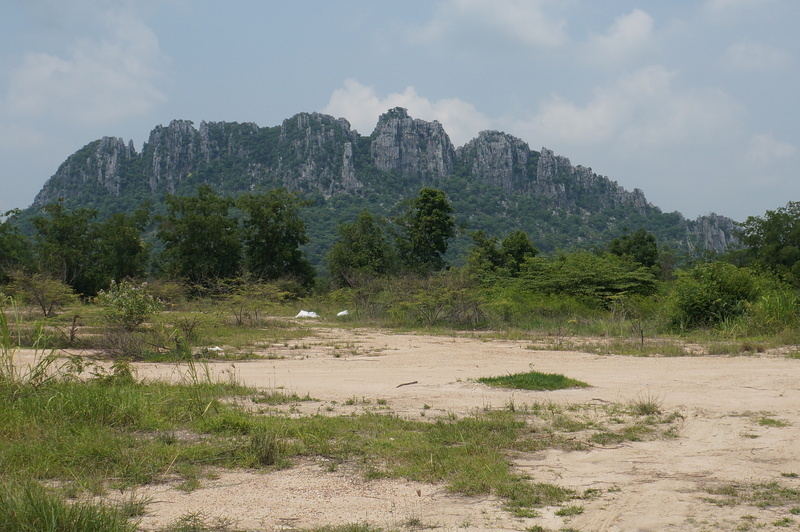 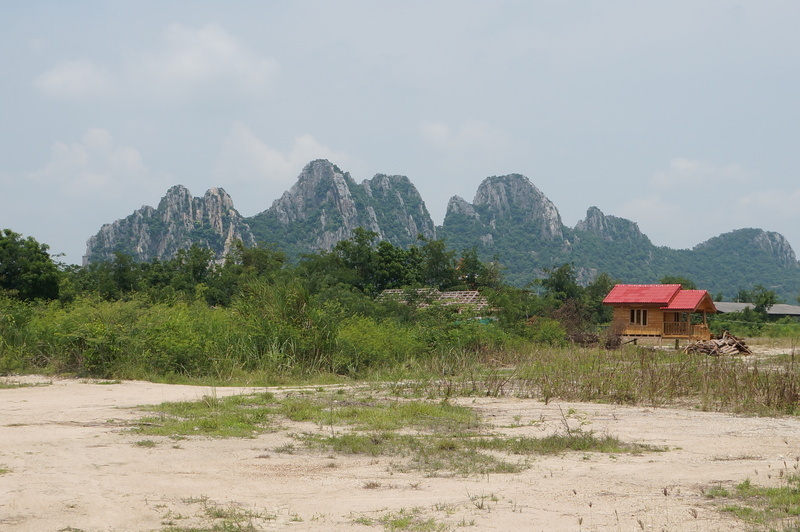 After you pass it, the terrain becomes flat again for another 200 km or more, until after passing Tak and then you begin to climb into the impressive mountain range south of Lampang. So Khao No-Khao Kaeo is a very distinctive change in the terrain for quite a long drive. You won't get an unobstructed view, and you'll want one, because tall trees, especially teak, line both sides of the highway.

As we drove towards Bangkok one time, with the mountains to our left, Paula found a crossing road that turned left toward the mountains. I walked up that road a bit to get the unobstructed photographs above. For some reason the mountain looks farther away and not as high in the pictures as it seems in person.

I also took a video, which shows how they appear to be two distinct mountains. I have found no explanation of the geology of this unusual formation.

There is more to this mountain than just looking cool. One can climb a stairway from the foot of the mountain to the peak, where there is a big cave that houses a large image of Buddha. The cave also has a large population of bats which can be seen flying out in a thick, long black line at dusk. We've never gone by at that time, so we haven't seen the bats. The mountain also has monkeys, which you will run into, if you climb the staircase.

King Rama V spent a night on Khao Kaeo, so there's a memorial that commemorates that at the top. This video may be showing that memorial and it also has some views of the flat plains below.

If you want to explore Thailand with some hiking, this mountain would be a good one to explore. This album shows some pictures of what you might see along the way.  http://www.p-lepetit.com/THAILAND/02-THAI%20PROVINCES/Nakhon%20Sawan/11-PHOTOS/Khao%20No-Khao%20Kaeo/index.html