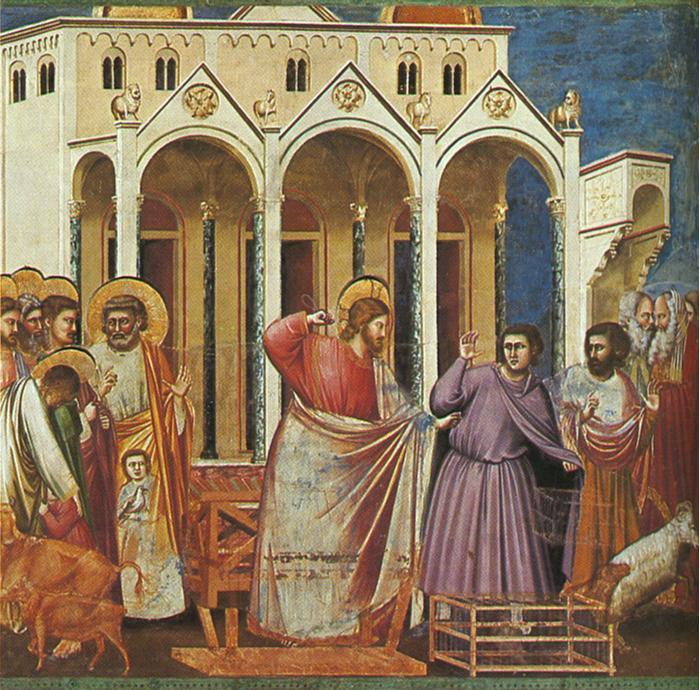 Expulsion of the Money-changers from the Temple by Giotto

There are ATM machines all over the place, especially in the malls and business districts of the major, and even not so major, cities and towns. If you have arranged to have an ATM card that can be accessed by these machines, it is a simple matter to insert one's card, enter the password, and request some currency in Thai Bahts, up to the daily limit of the card.

With my ATM card, the receipt clearly discloses an "access fee" they have added to the transaction (150 Thai Baht, or about $5), as well as the amount of Thai Bahts delivered to the customer. I suppose the ATM network gets to keep the access fee and the machine requires you to acknowledge you know they are charging a fee before it will release the Thai currency to you. But the receipt gives no clue at all about the exchange rate used in the transaction. So you know how much you got in Thai Bahts (you will count them to confirm) but you don't know how much was removed in US Dollars from your bank account back home to deliver this Thai currency: an inconvenient omission.

On the other hand, if you take US currency with you to Thailand, you can walk into a Thai bank and exchange some or all of this currency for Thai Bahts. In my experience the receipt you get with this transaction always states the exchange rate clearly and there is no service charge, it being built into the exchange rate. So then you have an accurate basis on which to convert purchases you make with those Thai Bahts into their exact cost in US Dollars.

Though more accurate, this approach takes a lot more time and trouble. The easiest way to go about it is to go to one of the modern malls in a Thai city. Unlike in the US, the banks usually have small offices in these malls (ATM's too), with them all usually gathered together at one end of the mall. For example, the new Central Plaza shopping mall in Lampang has at least six or more banks, all lined up next door to each other. Take your pick and go in and get your spendable currency.

Here's how it worked for me. I went up to the teller at the bank I selected, handed her five US one hundred dollar bills and asked if she could change them into Thai Bahts. She asked for my passport, which she photocopied and had me sign at the bottom of the copy. This is always the first step. She then went to work on her computer, presumably to get the exchange rate, consulted with the lady next to her, and they then informed me they could not do the transaction! They showed me that their computer said OFFLINE, so I suppose they had no idea how much to give me in Thai Bahts. They were apologetic and suggested that perhaps another bank could help me.

Well okay, I gathered up my US currency, as well as the copy they had made of my passport (no charge) and went a few doors down to another bank. This time I had to wait several minutes while my number (103) came up. They were servicing number 98. When it did, I went up and repeated the routine from before. I was a little surprised that she seemed willing to use the copy of my passport which I provided from the first bank, rather than seeing my actual passport, or asking for a fresh signature.

But I soon learned that this was the extent of her flexibility. She marched off with the copy and my $500 to discuss the matter in the back room with her boss. She returned with one of the bills, pointing to some red ink that had somehow gotten onto the edge of the bill. This was unacceptable and she wouldn't be able to change that one.

No problem, I had others and replaced that bill with another that had no red ink on it. I had once read that the border guards when you enter Myanmar from Thailand will also refuse US currency with marks on it in payment of the entrance fee. It was suggested that they'd really just prefer to get Thai Bahts in payment, rather than US Dollars. So I wasn't too surprised by the teller's action.

She disappeared again with the four original bills, plus the newly exchanged one. This time she came back, having discovered two more bills that were not flawless, which she handed to me. One had some blotches of blue ink in one corner on the back. The other had pencil markings on the front that said, "D. D. 7/06/09." Each flaw can be seen here at the end of the white markers. 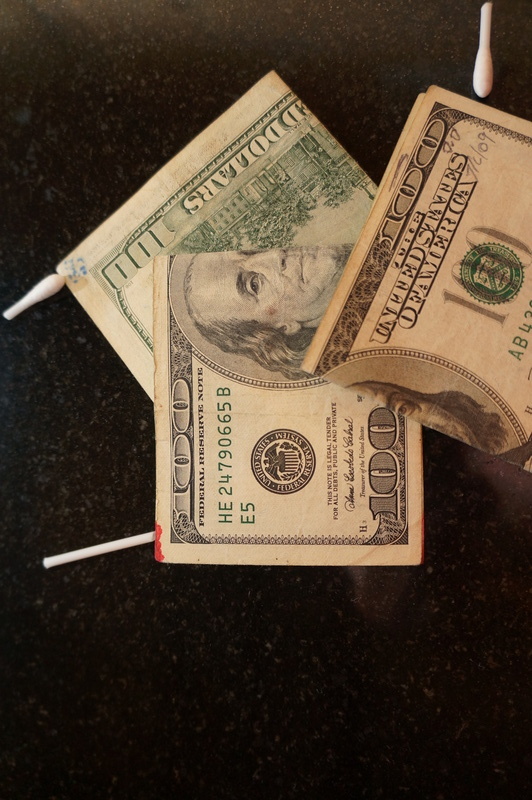 Well now I've gotten annoyed, mumbling to myself as I dig out two more perfectly unmarked bills to make five unspoiled bills that she might accept. And then she takes a magnifying glass out of a small box and begins carefully peering at each bill, with the intensity of a munitions expert about to defuse the bomb, her nose nearly touching the currency, as I wait for her verdict. I briefly consider terminating the examination, taking my currency back and going to their very own ATM machine to get my Thai Bahts. But I calm myself down and wait. Eventually convinced, she made two copies of the front of each bill. Not a copy of the front and another copy of the back of each bill. No, two copies of the front of each bill. She makes an X mark next to each of the ten copies and now I must sign my name in full next to each X. So much for her leniency in not insisting upon a new signature on my passport copy.

Finally I have surmounted all her hurdles. She fiddles on her computer and comes up with an amount: 15,080 Thai Bahts. I get the 80 in four twenty Baht bills and then she counts out the fifteen thousand Baht bills. I better confirm her count, so I start counting them, one to fifteen.

On the fourth one in, my life is suddenly transformed! Written in pencil on the face of the bill is the number 6. A light goes on, a very bright light, pointing directly at that 6! My annoyance over this process vanishes in an instant. Of course! We will play it out according to the rules of the game already demonstrated by the young lady! I pull out this bill and present it, where she can see it. I am suddenly jumping up and down inside, laughing at my sudden good fortune, "Yes, yes, yes!" while maintaining an all business look of just getting it right on my face. I place it on her side of the counter, she nods and reaches into her drawer to find a better one.

As I resumed my count, I found another and then another and then another!! Now four in all, and all rejected in a very matter of fact businesslike way, just following the lead of the bank teller. Of course, I cannot accept a thousand Baht bill with any flaws or defacements! And she accepts this unspoken requirement, the extension of her very own rules, by digging through her drawer for perfect bills, nearly giving me sixteen, instead of fifteen, in all, in the process.

We finally conclude this matter, my spirits soaring over having restored some sense of a customer deserving and getting excellent service, in place of the previous humbling ignominy of having spoiled American currency. We exchange businesslike thank you's, I turn and walk out the door (merrily skip out the door on the inside) into the rest of the mall.

I am bursting with excitement as Paula joins me and asks, "What happened?!!" So I give her all the details, but not until we have moved out of the view of the teller. We have a really good laugh and go on our way to start spending some of my perfect thousand Baht bills.

And the moral of this story is that if you plan to take US currency to Thailand to be exchanged there for Thai currency, go to your bank in the US before you leave and get only freshly minted hundred dollar bills. It might save you some time and trouble in Thailand. Ohhhhh, the downside? You won't have even a fraction of the fun I had!