Leave it to an old ham radio operator to travel 8,000 miles and end up stumbling upon an antique store full of old radio receivers! 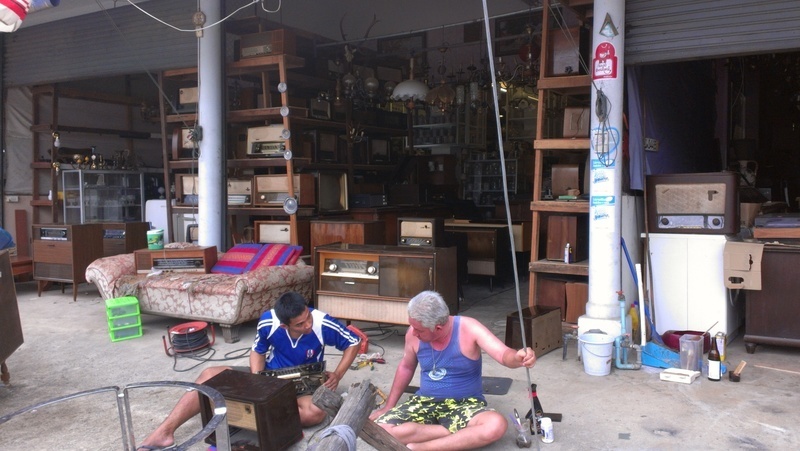 While out taking a 3.7 mile walk in Singburi, Thailand, we came upon this scene. Of course my eye immediately spotted the old radios, so I walked over and had a look. Sitting in front on the concrete were the owner and his young apprentice. They were cleaning up an old radio while holding it in their laps; cosmetic repairs, not electronic repairs, their tools being rags, a solvent, paint brush and a bottle of beer. On the shelves inside the store were dozens of old radios. "Well, we may have discovered a local ham," I thought to myself.
No such luck. When I said "ham radio," there was no hint of recognition of what I was saying. I pointed to ham radio sections on the dial of the radio beside the owner, "See here, 7 MHz is the 40 meter ham band, 14 MHz is the 20 meter ham band." Nothing. Okay, he's an antique dealer, not a ham, and maybe not even a short wave listener.
Oh well, there's still a lot of radios here to look at. I wandered around the store, which was jammed with stuff, leaving little room to maneuver in most places, as with many  junk stores, oops, antique stores. There were tons of mostly wood cabinet radios in various conditions, as well as many clocks on a wall, a section of antlers, some display cabinets with china, beer steins and all sorts of other oddities. I didn't see any work bench or table with a volt-ohm meter or any other equipment for repairing electronic gear.  The cosmetic repairs they were doing out front was likely the extent of their efforts on these radios. It reminded me of a large collection of old radios that appeared some months ago at Halted Electronics, the surplus electronics store in Sunnyvale, CA. There were no Collins radios or ham radio equipment of any kind in the Singburi shop. 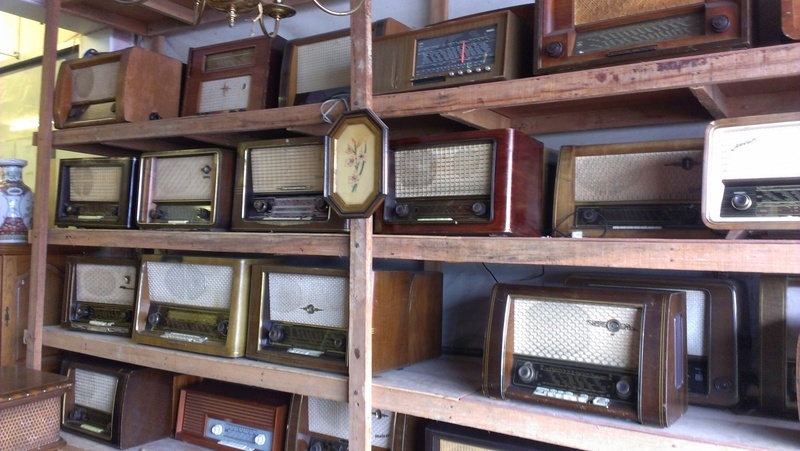 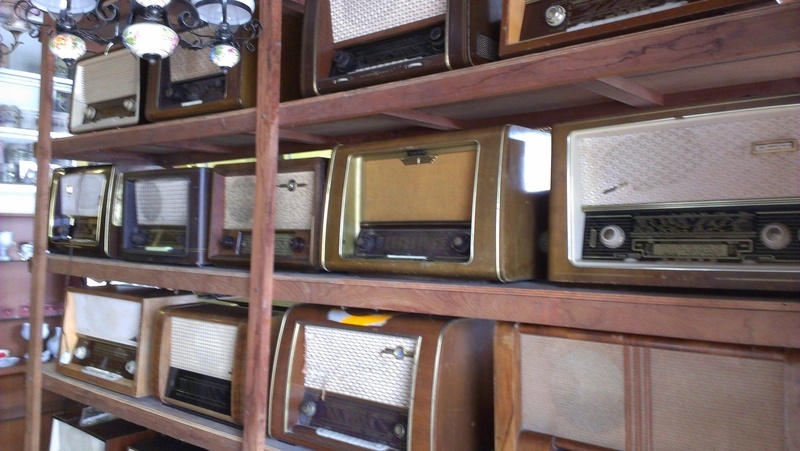 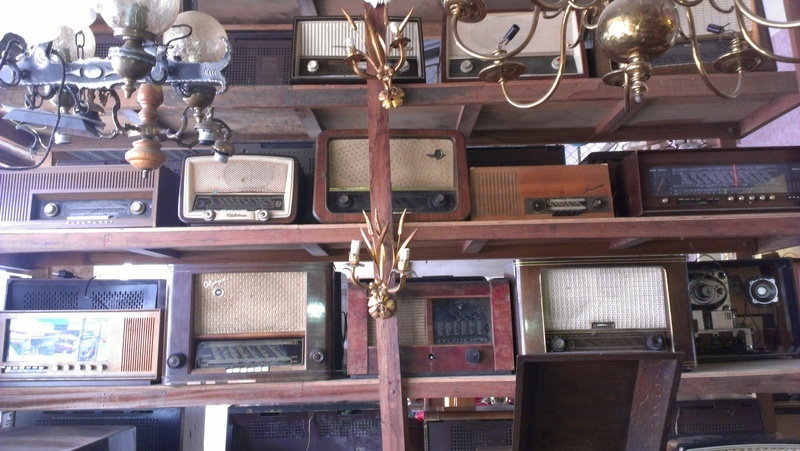 I went back outside and chatted with the owner, well, as much as we could with my non-existent Thai language skills and his limited English language skills. A nice looking Blaupunkt radio caught my eye (below) and I asked his price. After some mumbling and grunts, the owner said he wanted 5,000 Baht, which he then converted to about $158 US in his head for me. I asked him whether it was working and he said, "Oh, no." But I'm not positive he understood my question because when I asked him whether he had ANY radios which were working, he again said, "No." Surely in all these dozens of radios, there must be at least a few that were working. 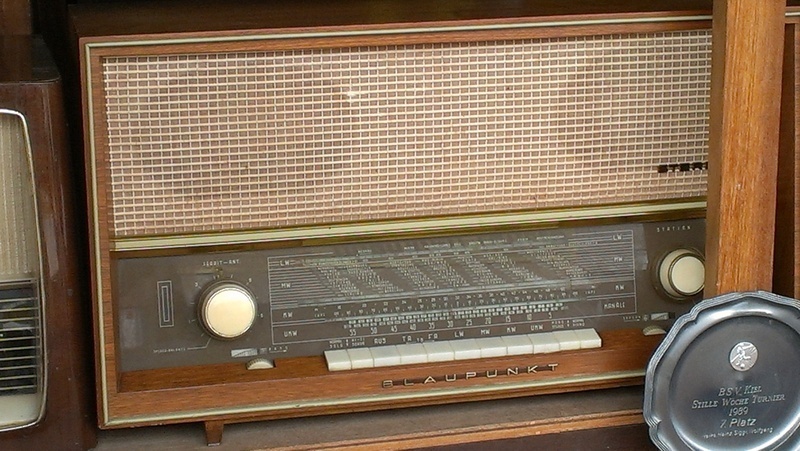 He explained some of the difficulties, saying Thailand uses 220 watts in their radios and America uses 110 watts. Of course he was referring to the difference in line voltage between the two countries, 220 vac for Thailand and 110 vac for the US. He listed a bunch of other countries and how many "watts" they used, ending by saying he didn't know what Russia used. He suggested I should look around and let him know if I found one that really interested me. I knew prices would be negotiable, but I explained that I was from 8,000 miles away and the shipping costs would be too much for me. He nodded. I asked him whether he minded my taking some pictures and he said that would be "okay." So I gathered the pictures shown here.
If I were furnishing a home in Thailand, this would certainly be a place I would come. The voltage difference is easily solved with a voltage converter and many of them could likely be brought back to life easily, if they weren't already working. I would make an offer on the Blaupunkt, or perhaps on this Grundig. But the distance saved me from adding to my collection of too many radios! 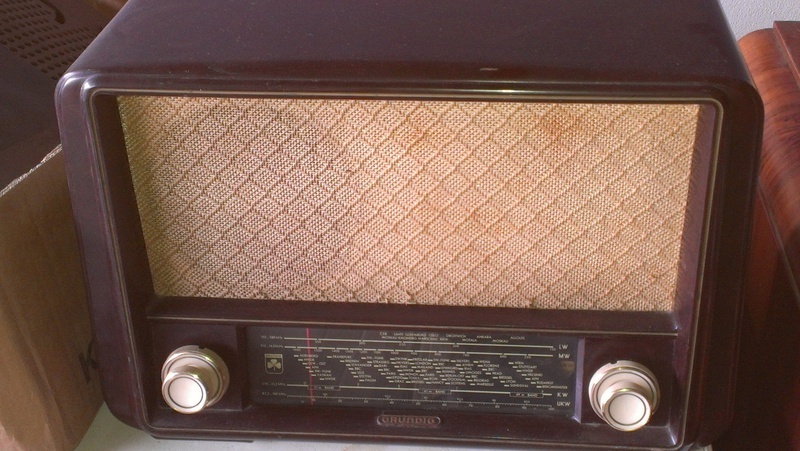 I told him he had a very nice store and thanked him. He looked pleased and I was on my way, relieved that I managed to get away without beginning to calculate estimated shipping costs.