Thailand has street vendors everywhere. A lot of them are selling food they cook right on the spot. Paula knows what is good and we eat a lot of it.

After food, there are probably more street vendors selling jewelry than anything else, just like when I was a street artist in San Francisco. We have spent very little time looking at their wares. But in Kanchanaburi we stopped to look, trying on a million rings and finally settling on one to buy. I was drawn to the rubies (my birthstone) but Paula liked the black onyx and that's what I ended up getting.

Later I found this guide to the ten best things to do in Kanchanaburi, which includes "09 Shop for fabulous jewelry." http://www.tat-la.com/destinations/kanchanaburi

Kanchanaburi is famous for its gemstones. The small village of Bo Phloi is well known for its locally mined blue sapphires, and semi-precious stones such as the onyx. Visitors can visit the Jewelry Handicraft Center to see how these materials are honed and fashioned into spectacular jewelry sets. For souvenirs, River Kwai Park Market, right next to the bridge, is quite convenient.

The River Kwai Park Market is exactly where I bought my new ring: a sterling silver setting, a large many-faceted black onyx stone, and a very Thai-looking dragon on both sides. Surely made locally with onyx from the area for the princely sum of 450 Baht ($15.52.) How can you pass up a deal like that?! 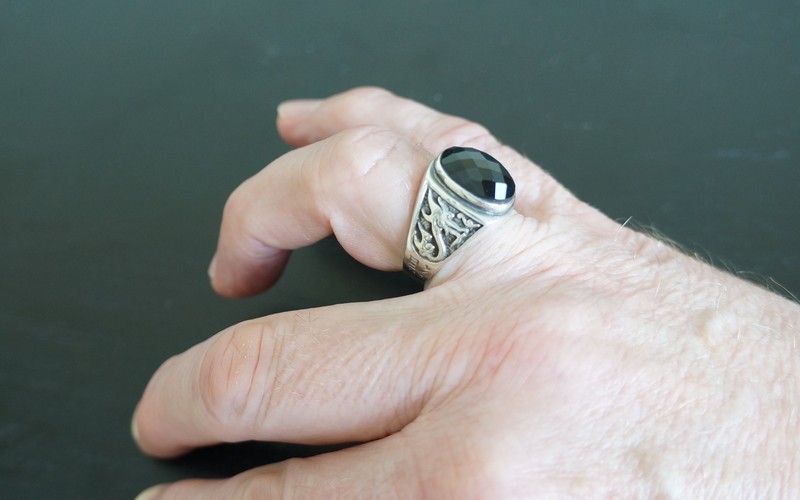 It was Paula, not the written advice, who guided me to the spot and then pointed the way to the locally mined onyx. It's neat to have such a nice ring produced in a place in Thailand that I really liked a lot.

The day we left Kanchanaburi, we decided to swing by the jewelry market once again. When you're in a town that is famous for its fabulous jewelry, it's a good idea to take a good look, if you like that sort of thing. In a very small area there are dozens of vendors selling these wares, with likely hundreds of thousands of different rings being shown, along with bracelets, necklaces, ear rings and a lot more. I've not seen a bigger variety offered in one place before. We didn't have far to drive for Paula's next work assignment, so we could easily spare the morning with some shopping.

We ended up spending a lot of time with another jewelry lady than the one that had my onyx ring. My eyes were immediately drawn to a fairly large selection of ruby rings in gold settings. I tried one on that fit, but Paula wasn't enthusiastic about it. She was chattering away with the lady about jewelry she had in another display case, including some nice bracelets and dramatic large rings. Paula would show me something, I'd look and then say, "I sure like those ruby rings." Paula and even the lady would give me a rather noncommittal "Mmmm."

And then they found the ring they both agreed I should get. They were very enthusiastic about it and it did fit two of my fingers. It struck me as quite dramatic and unusual, but I wasn't sure at first. They kept pointing to the large stone, a pink sapphire, and saying, "Original!" I'd look at it and then look at the ruby ring and they'd point to the sapphire again and say, "Original, original!" I was making no headway with the ruby, so I finally decided I better understand what this original was all about.

I had learned along the way that sapphires are one of the gemstones, along with onyx, that are found locally in the Kanchanaburi area. So I confirmed that the sapphire they were showing me had been found in the area and the ring had definitely been made locally, just like my onyx ring. But that didn't seem to capture the full meaning of original. Perhaps they meant the stone was very unusual. Looking over the hundreds of rings she had, she only had two rings with the pink sapphire stones and none with blue sapphire stones. But she had a whole section of the ruby rings in gold settings, so they were much more common.

It seemed odd to me at first that they also kept pointing to the fact that the sapphire was set in silver, which they said as, "S i l v e r !" I'm thinking, yes, but gold is better, right? We talked it over and Paula liked that the silver setting would match the silver setting of my onyx ring. The lady had said the ruby ring was set in 18K gold. Ahhhh, but then I learned the 18K is really 18K gold plate. The silver setting is just silver, well not solid silver. Solid silver is too soft for making jewelry. It was stamped "925" on the inside, just like my onyx ring. 92.5% silver is the alloy that is sterling silver, the standard for silver settings. I begin to weaken about the ruby.

So then I have another go at the original aspect, asking whether the ruby was original or not. "Noooo." But the sapphire is original, right? "Yessss! Original!" Okay, then "is it really a fake ruby . . . fake ruby?" I look at the lady and see a tiny little nod, while hearing both her and Paula saying, "Mmmmmm." Okay, that did it. Original meant genuine, the real thing, not fake. That ruby ring was gorgeous, but it was not original. And I would know it as I wore it. The ruby ring went back into the display case.  http://abcnews.go.com/GMA/ConsumerNews/rubies-real-deal/story?id=8988951#.UcEdgH17P2F

Okay, final thing to check on the pink sapphire. I ask, "Is this a ring that is made more for a pretty boy to wear?" An immediate and emphatic response from them both, "NOOOO, this is ring for Thai man. . . Thai man!!" Okay, just checking. Paula adds, "Pretty boy only like diamonds!" And sure enough, in this video diamonds, or fake diamonds, are everywhere.  http://www.youtube.com/watch?v=mWKZjIVhsf8

The one who posted this video commented that, "Beautiful transvestites are respected and seen as celebrities in Thailand." From what I've seen, this is quite true and a very interesting aspect to Thailand's culture, which genuinely seems to respect all people. This even extends to the area of hiring, as Paula now has a co-worker who is a supervisor in the Isaan region of Thailand and is a pretty boy. They work for a large Thai corporation that sells a major US name brand of products in Thailand. Paula seemed surprised at first that a pretty boy had made it to such a position, but there was no animosity in her tone. We had dinner one night with other supervisors who had worked for the company for twelve to twenty-five years, as well as this new one, and they all seemed to accept the pretty boy and they all interacted together in a normal way. 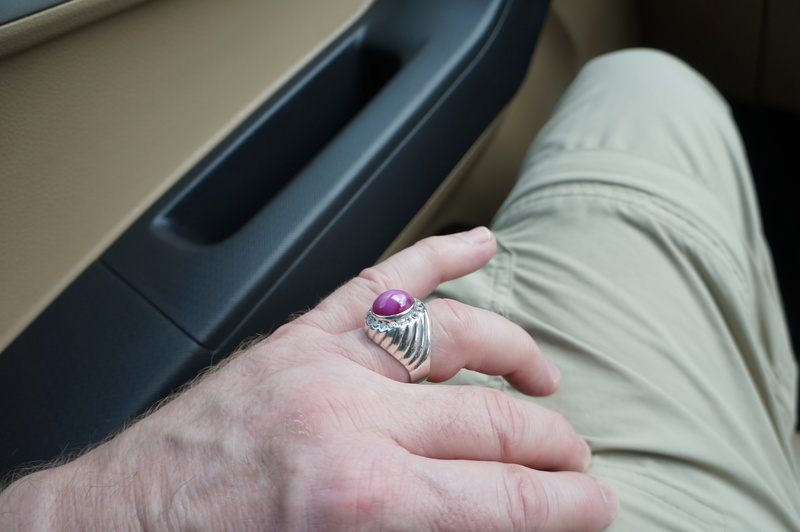 So here it is, positioned so you can see the sterling silver setting, as well as the ring of diamonds around the sapphire. 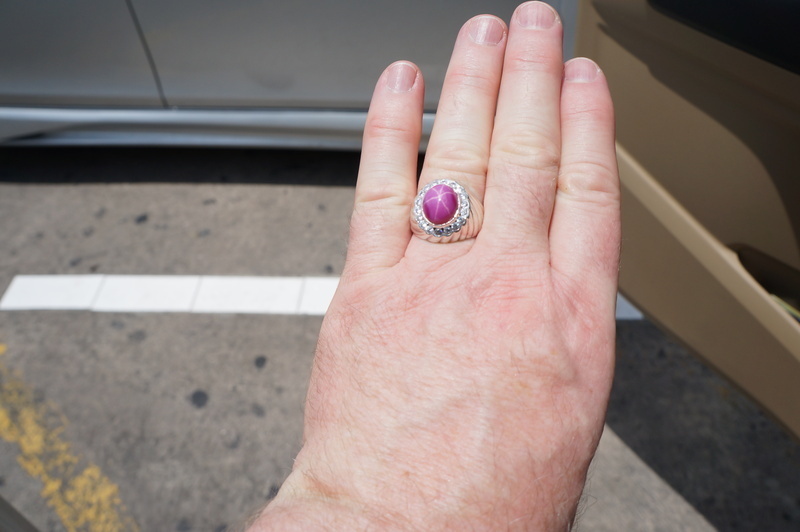 And here it is photographed outdoors in the sun, so you can see the star. Yes, it's a star sapphire, the aspect that finally clenched me on buying it. The stone is cut en cabochon, with the center of the star near the top of the dome, the way star sapphires are usually cut. The asterism is very clear, with the usual six rays, easily seen in the sun, or even under a light inside, and it doesn't have to be a really bright or focused light. Inside in normal lighting when the star is not evident, the stone looks more red than pink. Outside in the sun, the asterism is quite dramatic and quite beautiful. The sapphire is second only to the diamond in hardness, and if you look at the definition of sapphire at the top of this Wikipedia article, it says, "Chromium impurities in corundum yield a pink or red tint, the latter being called a ruby." I had bought a star ruby ring! http://en.wikipedia.org/wiki/Sapphire#Star_sapphire

There are fake star sapphires too, but I'm happy with this one and believe it to be genuine, or original. It passes the tests as natural, rather than synthetic, in this guide to fake star sapphires. It has no L stamped on it, the rays are not all uniform or perfectly straight, it definitely moves with the source of light, and the stone has some imperfections.  http://www.ebay.com/gds/HOW-TO-SPOT-A-FAKE-BLUE-STAR-SAPPHIRE/10000000006988238/g.html

After I bought the star ruby ring, we drove to Singburi. That day, and other days since then, Paula would look over at my hands, see the two Kanchanaburi rings on my fingers and smile broadly, sometimes even laughing with pleasure. I feel the same way about them and would join in with her laughter!

Very close to where I bought the rings, I bought a new hat. The fedora I bought last year got a bit crunched along the way, so I had been considering getting a new one. This new one is larger, 58 cm according to the label, which fits my head better. The other one was pretty tight and probably too small really.

The hat was made in China, so it's not a product of Thailand. But you see them everywhere around Thailand, so it's still a good souvenir of Thailand. Here's the surprise from the label inside: 100% PAPER. That's right, it's a paper hat. 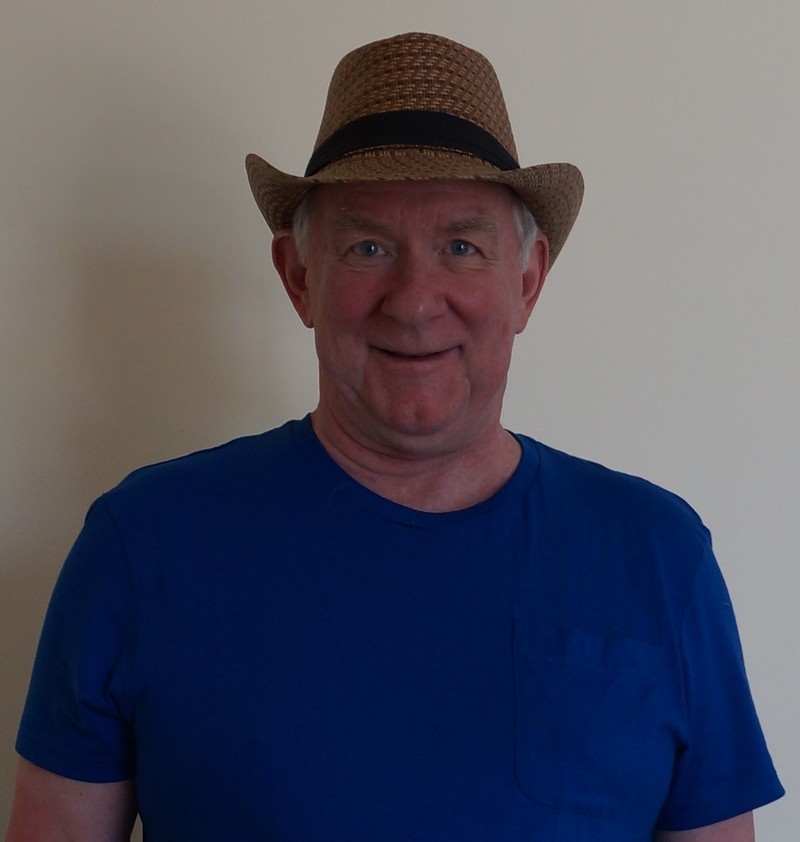 I'm always drawn to leather, because of my days making and selling leather belts in San Francisco. The first time I was in Thailand I bought two rings that were carved from buffalo horn. This time we came across these images carved from thin buffalo hide and then painted. 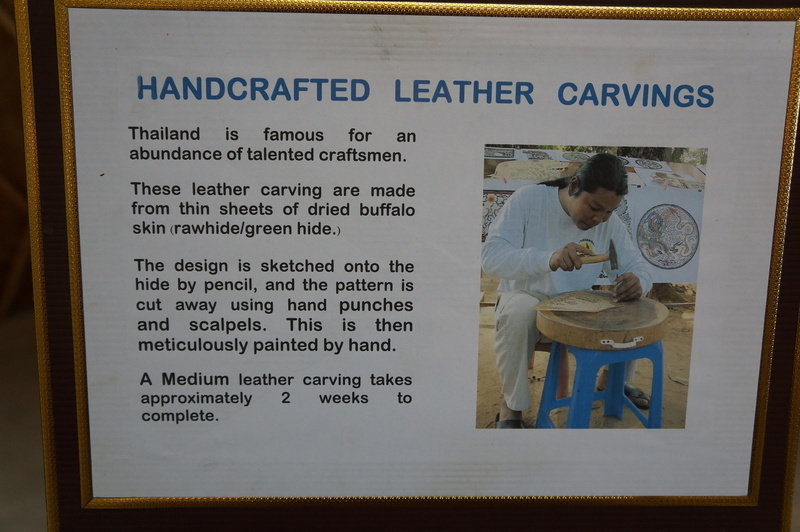 The ones offered for sale included some of chang (elephants), a favorite of anyone who comes to Thailand. Two weeks to complete and only 390 Baht ($13.45), which seems more than fair! Here's the one I selected, black chang with gold trim. 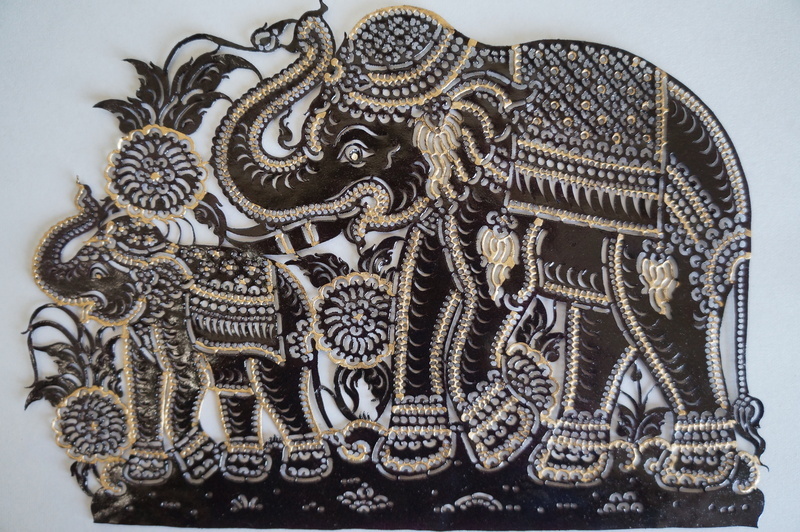