Yesterday we drove from about twenty minutes east of Lampang to Chainat, a distance of about 450 kilometers. It was sunny in most directions with occasional dark clouds off in the distance.

But we drove through two strong rain storms, the windshield wipers barely keeping up with the rain pounding onto the truck. Maybe we should pull over and wait it out? No, we keep going, because the sky is still sunny in most directions. And then as quickly as the rain had come, it ended, the windshield quickly dry in the heat again.

Wikipedia says "a cloudburst is an extreme amount of precipitation, sometimes with hail and thunder, which normally lasts no longer than a few minutes but is capable of creating flood conditions. Colloquially, the term cloudburst may be used to describe any sudden heavy, brief, and usually unforecast rainfall."

It would have been even more fun, if we had had some thunder. It was as though the gods finished a wash and dumped the entire contents of the full wash basin right out onto our truck below.

ADDENDUM
Two days later, while driving from Suphan Buri (City of Gold) to U-Thong, we saw what Thailand really has to offer when it comes to rain storms. 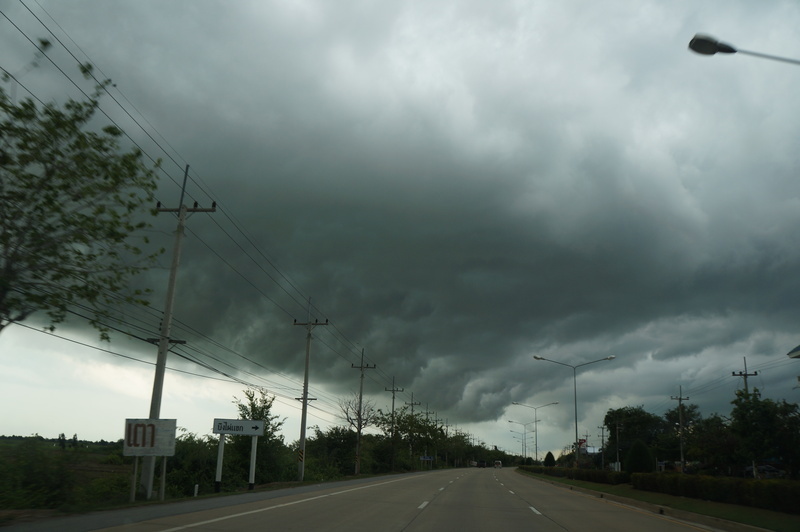 This time the rain came as no surprise, we saw it coming from far away. If these clouds had appeared in Oklahoma, the storm trackers would have been lined up, watching for funnel clouds, but Thailand does not get tornadoes (nor earthquakes nor volcanic eruptions). http://voices.yahoo.com/what-natural-disasters-could-experience-thailand-5470803.html?cat=16

Once the rain started, it pounded hard for over ten minutes, with lighter rain for five more. While we were inside the rain, the sky was no longer black, instead everything was white around us. We discovered that visibility in the strong rain was actually enhanced by putting on our sunglasses! Once through the rain, we could see black clouds in the distance again as we arrived in U-Thong. We were getting thunder, but no rain, as we quickly unloaded the truck and brought our stuff inside the hotel. Before long the rain arrived in full force at the hotel and lasted much of the evening. 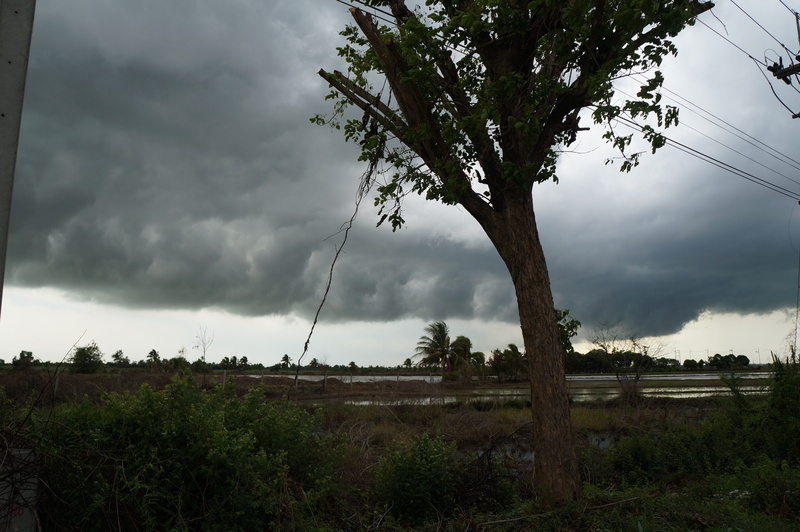