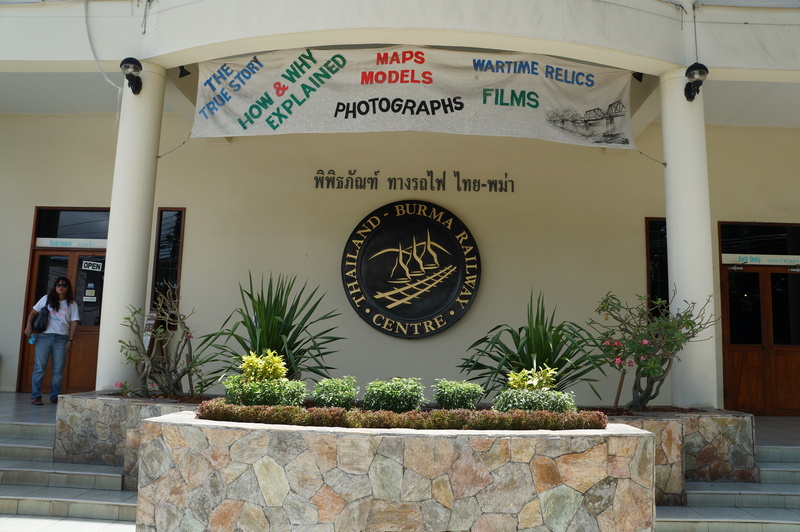 We walked west along the side of the cemetery on Sangchuto Road and turned left at the corner onto Chao Khun Nen Road, walked half a block and found The Thailand-Burma Railway Centre, also known as The Death Railway Museum, looking out onto the cemetery we had just left. We went in the entrance door on the left side, which brought us into a gift shop, where one can buy books and souvenirs, but one cannot see any museum exhibits. There was an entrance fee to see those (110 Baht for Thai people, 120 Baht for foreigners),  a surprisingly low premium charged for foreigners over locals. Actually their website now shows the one price of 120 Baht (60 Baht for kids), so maybe Paula had managed to arrange a discount for herself. We had read nothing in advance about this two story museum, so we were a little bit concerned that we might be disappointed. But with our interest piqued from the cemetery, we decided to pay the fees and explore the museum. It ended up being money very well spent, with two floors full of detailed exhibits.

But the museum does not allow cameras to be used in the exhibit areas. If it had, I would have taken a lot of pictures! There are a few images on the museum website, but none where you can read any of the information provided. The information was detailed, with many pictures, as well as models and examples of artifacts from the war years. They had a mockup of one of the "rice wagon" railway boxcars used to transport prisoners from Singapore and Malaya to Thailand, so packed with prisoners (32 in each) that nearly everyone had to stand for the entire five day ride in the train, without ventilation. These were not boxcars as large as the ones I saw on trains growing up in Illinois. They were much smaller. The ride from Singapore would have been torture enough, but their nightmare was only just beginning with that ride.

On the first floor of the museum there is a small theater, where they were constantly showing a part of the film Kwai: The True Story (1992), a documentary which includes eyewitness accounts of life working on the Death Railway by some who had survived the ordeal. It was in English and it confirmed one aspect of the story as told in the hugely successful 1957 film, The Bridge on the River Kwai. As the prisoners marched to work, they sang a popular British song, "Colonel Bogey March," which the Japanese guards found endearing, while not realizing that the song lyrics were actually mocking them in defiance, a sort of unofficial British national anthem to rudeness. This was the only part of their stories that the eyewitnesses told with obvious pleasure in the film.

Unfortunately I have not been able to locate a version of this film streaming on the Internet. WorldCat lists a number of libraries that have the film on VHS tape, but none are closer than 1,100 miles from my home. I would really like to obtain a tape of the complete film. The eyewitness accounts it contains should not be lost to history. The film was apparently also episode #48 of the "Time Machine With Jack Perkins" television series.

Near the movie theater the museum has re-created a room that shows the hospital facilities at a typical POW camp, complete with life size soldier and doctor mannequins. One can walk around the small room and see their activities up close.

Then a stairway leads to many more exhibits upstairs, with display cases holding many artifacts from the POW camps, including examples of the single small bandana size pieces of cloth that served as the only piece of clothing that many POWs wore in the extreme heat.

There are also large maps that show where the camps were located and where burial sites were located that contained remains that were eventually transferred to the Kanchanaburi War Cemetery.

There is also a large display of the AZON bombs, which were the first smart bombs ever used in a war. SPOILER ALERT. The American USAAF 493rd Bomb Squadron, known as the AZON Squadron, flying B-24 aircraft from Pandaveswar, India used these bombs to destroy bridge after bridge along the Death Railway. Finally on 13 February 1945, after many failed attempts using conventional bombs, Frank Nelson, the bombardier in one B-24 piloted by Lt. Gene Morris, was able to take out one span (another account says two spans) of their primary target from a low level of 300 feet, the concrete and steel bridge known as bridge 277. Many planes had gone after that bridge and one life was lost in all of those planes. They later learned that bridge 277 was the famous "Bridge on the River Kwai." Be sure to read the first-hand account about that bombing campaign and its eventual success, as well as the second one. The bridge was NOT destroyed in the way it was shown in the 1957 film. A total of 459 AZON bombs destroyed  27 bridges along the Death Railway line.

It should be noted that there are discrepancies in the reporting of these events found on the Internet. The second report linked to above makes no mention at all of the AZON bombs and it reports many dates by the day and month, but without the year. It only mentions a year once, referring to an event in March 1944 said to be AFTER the bridge was taken out. Surely that date should be March 1945. An even more egregious error is contained in the Wikipedia article on the Burma Railway that reports, "According to Hellfire Tours in Thailand, 'The two bridges were successfully bombed on 13 February 1945 by the Royal Air Force.' " Other sources universally attribute the lethal hit to an AZON bomb from the USAAF 493rd Bomb Squadron, not the RAF.

Number of bridges attacked by bombers: 36 with AZON bombs; 19 without AZON bombs.

Number of bridges destroyed: 23 by AZON bombs and 3 by conventional bombs.

Number of bridges partially damaged: 3 by AZON bombs and zero by conventional bombs.

Clearly the AZON bombs made the difference in these bombing campaigns.

At the museum I also made notes of the number of deaths reported during three different time periods along the Death Railway, as follows.

A visit to this museum is both an educational and a sobering experience!