"Elephant in the room" is an English metaphorical idiom for an obvious truth that is either being ignored or going unaddressed. The idiomatic expression also applies to an obvious problem or risk no one wants to discuss.

It is based on the idea that an elephant in a room would be impossible to overlook; thus, people in the room who pretend the elephant is not there have chosen to avoid dealing with the looming big issue.

That description is from Wikipedia.

In Thailand, you don't need no stinkin' metaphor. An elephant may just be in the room!

We went to dinner in U-Thong at a restaurant by the side of the busy highway going through the center of town. Only this was a dinner eaten off of a blue folding metal table, put there by the street food vendor who had her motorcycle food cart parked right near the curb of the road. Like many restaurants in Thailand, this room had no walls. We were outside, large dirty trucks crashing by twenty feet away.

A small fellow suddenly appeared, leading an elephant about the size of a VW bug, only taller. It had a bright red light fastened on the top of its tail. That's right, an elephant with a TAIL LIGHT. No kidding. He wanted money from the rich farang (foreigner). No more than five minutes later, another young fellow came along, leading an even younger and smaller elephant. No tail light. Also wanted money.

There's a surprise in this country every day!!

Yes, folks in Thailand are allowed to own their own elephants, although they are NOT supposed to take them into the cities. 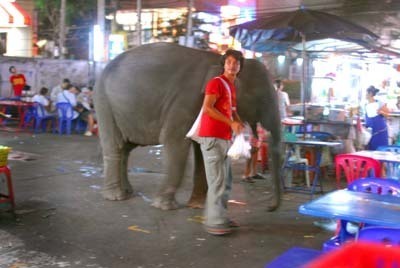 My mouth dropped open when the elephant arrived, but I was the only one who seemed at all surprised, as this is nothing new. This is a looming big issue in Thailand, as elephants have been largely put out of work by the January 10, 1989 ban on the harvesting of timber in Thailand, following the worst flooding there in nearly a century. 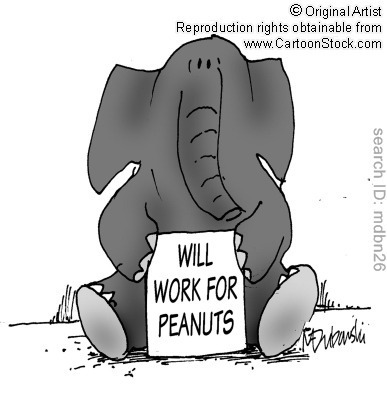 Can you imagine how much food an elephant must eat in a day?

While a unique experience for a farang from the US, it gives one pause and is actually rather sad when you think about the plight of the elephants. Chang (the Thai word for elephant, pronounced "chong," not "chang") is a huge part of the culture here, the national symbol of Thailand. And the importance of the chang in the culture was well earned by the considerable amount of work they did to help build the nation. At the Grand Palace and Wats (temples) all over the country, there are statues and pictures of chang everywhere!
A very popular beer in Thailand is called Chang Beer, with a picture of an elephant in their company logo. You see their advertising signs everywhere and I have even had Chang Beer at my local Thai restaurant in California. One of our best friends in Thailand, Wit, makes a good living working for the Chang Beer company.
At the Grand Palace in Bangkok, people leave coins on top of the many statues of chang, believing it will bring them good luck. The chang is honored, respected, celebrated in Thailand.
But the chang has also become an endangered species. Will statues be all that remains one day? I certainly hope not. Their population is said to be stable now, at somewhere between 5,000 and 6,000 elephants in Thailand.
http://www.thailandelephant.org/en/thaielephant.html