See my previous posting, How Green is Your Rice Field, for the lead in to this article.

Paula's timing was amazing in guiding us one kilometer down the narrow paved road to the wat shown in that article. No more than thirty minutes earlier I had been waxing philosophic about the Buddhist monks in Thailand. I was saying they lived simple lives without a lot of possessions, but maybe they had it pretty good really. After all, it seemed like in every town in Thailand, they had the best view in town. Drive through any town with a mountain or steep hillside, look up, and you're likely to see some gold glinting in the sun, from the local wat. "Best view in town." I said.

Within the hour, Paula had proved my point for me. We took a slight detour and visited this new wat that she knew about, even though she had never been there herself, called Wat Khao Nang Baut, which is on the summit of Nang Buat mountain. It didn't look like much as we drove into the parking lot. There was a giant billboard in Thai script, which told me nothing at all about it, and we could see some steps going up the hillside. There was also an even narrower road that looked like it might go up to the wat itself.

Paula parked so we could have a look at the steps. The dense forest on the hillside prevented us from seeing any of the wat above. Paula said she didn't want me having to climb the steps, but we go over to look at them. What a lovely stairway, and the first fifty steps or so were very shallow, very easy to go up each one, much easier than the pitch of a normal stairway. So next thing we know, we're walking up the steps, real easy. There was a sturdy metal railing, supported by freshly painted vertical supports. 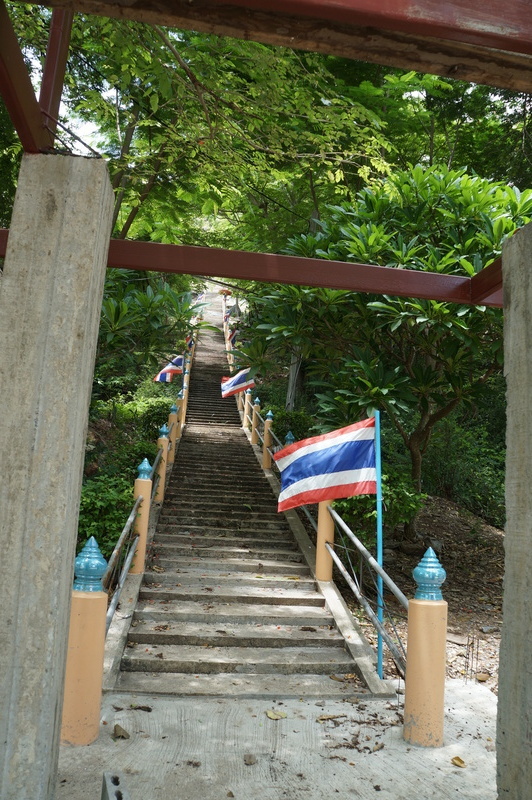 Before long we discovered they were still working on the staircase. Higher up we found the metal railing was wrapped in chicken wire and above that, cement was covering the chicken wire to make a much thicker railing, then textured to look like wood logs. Finally near the very top, the railing was painted dark brown to make it look even more like wood logs. 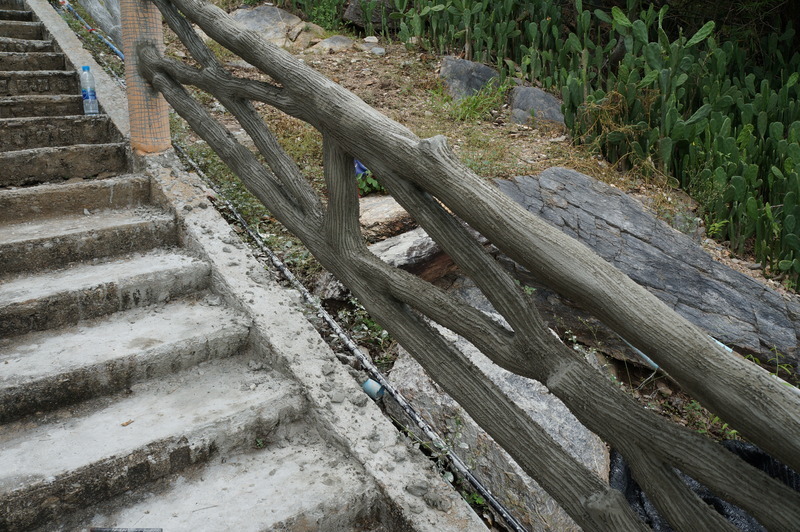 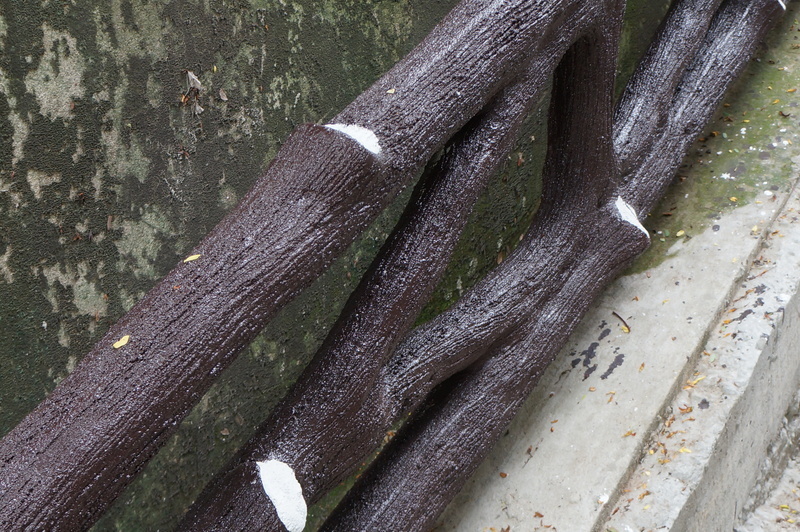 The steps began to be steeper and we had to rest a few times to make it up all of the 284 cement steps.

We peeked part way up, looking behind us to see some of the rice fields below, through the trees. We were also quite surprised to see lots of small cactus plants on the steep hillside next to the stairway. So we were pretty well entertained all the way up those stairs. The last twenty steps or so were the steepest, but we made it. 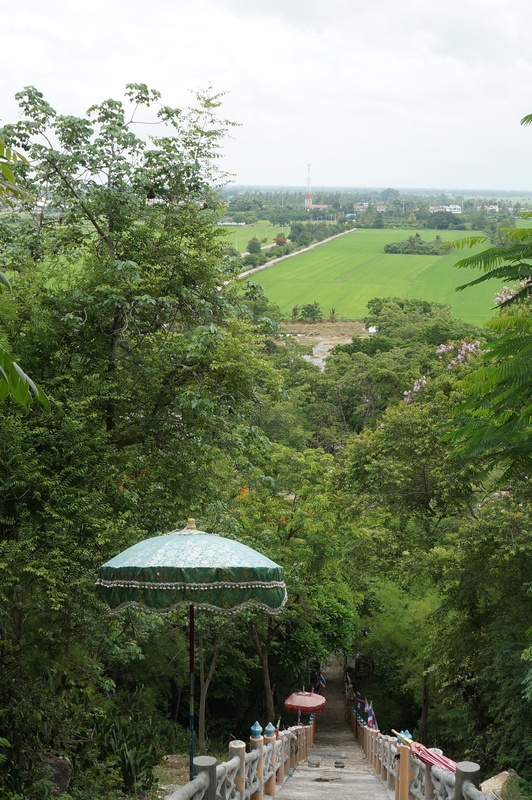 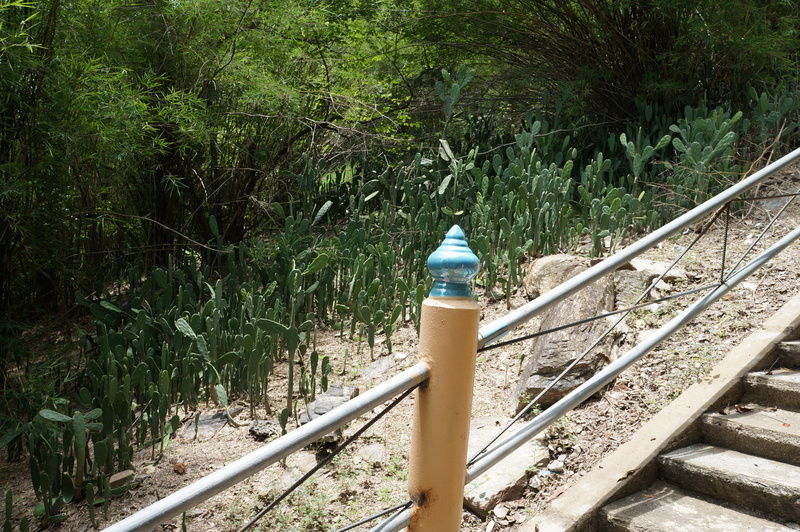 We pulled ourselves up those last steps, looked to our left to see some workers resting on benches, and then to their left to see that a long railing ran in front of them, and beyond that railing a panoramic view of the farmland below, that immediately took our breath away. 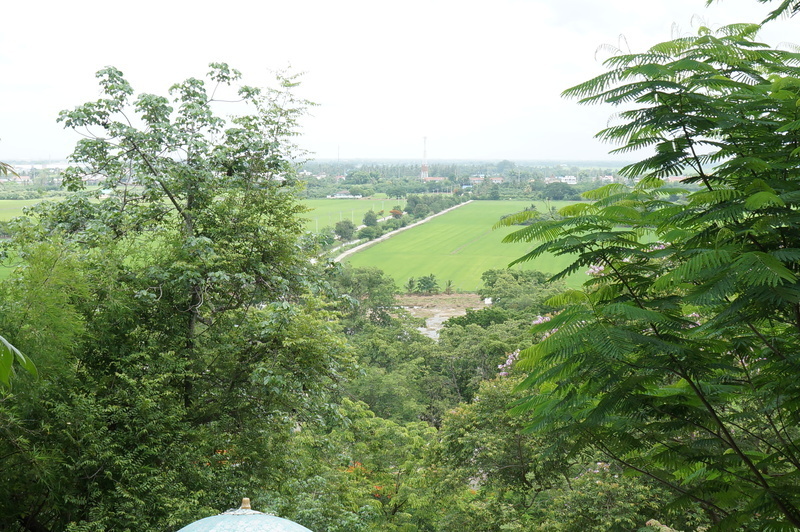 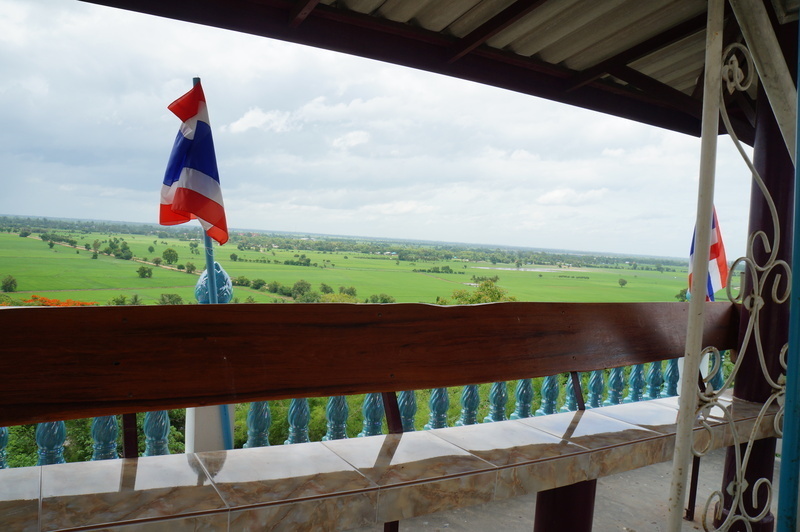 "Best view in town!" I said, after catching my breath. The workers were all smiling at us, as I gave them a thumbs up. And then I started catching the view with my camera. "This is exactly what I was talking about, you know, best view in town!" The railing went for long stretches of unobstructed views on at least three of the four sides of the property. It seemed to be perched right on the hilltop, everything lower all around it.

Between shooting pictures and videos, I looked out and found myself wishing that I had one of my ham radios and a portable antenna with me. There were plenty of places to sit near the railing and I could easily imagine the sound of people calling me with Morse Code from distant locations in all directions. I was dreaming about spending an afternoon chatting in Morse Code with all those other hams.

Then I tore myself away from the railing and went toward the center of the property, getting pictures of the temples, Buddhas, bells, and religious symbols. 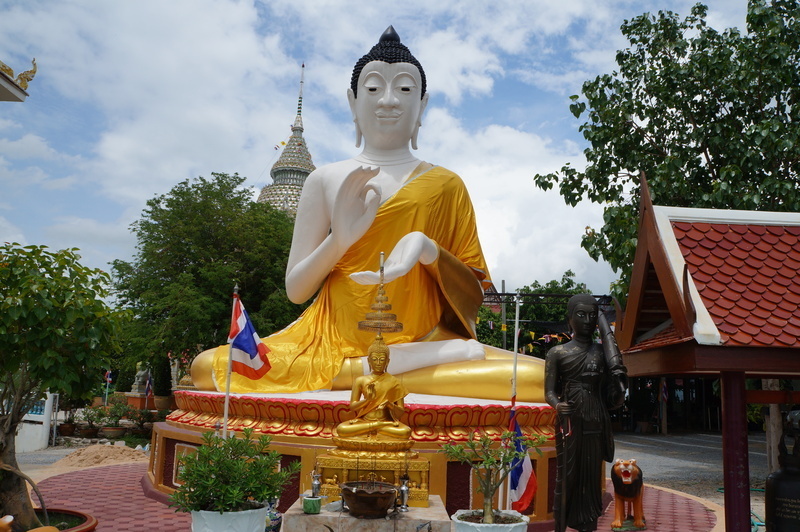 On one side of the property, we found a large metal swing: metal benches on opposite sides and a metal table in the middle, all designed to swing together as a unit. We climbed aboard and started swinging, while taking pictures of each other as we flew through the air. Great fun! 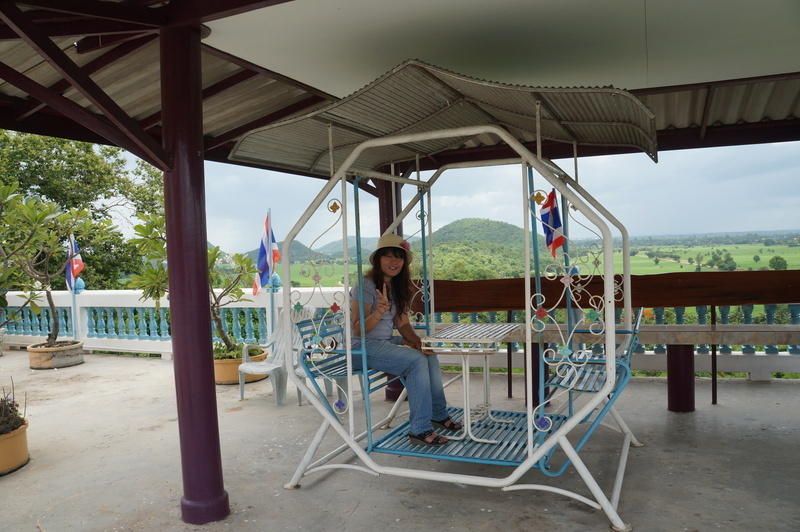 Finally near the end of our little tour, we found a large sign with a diagram of the  location of the various things on the property. 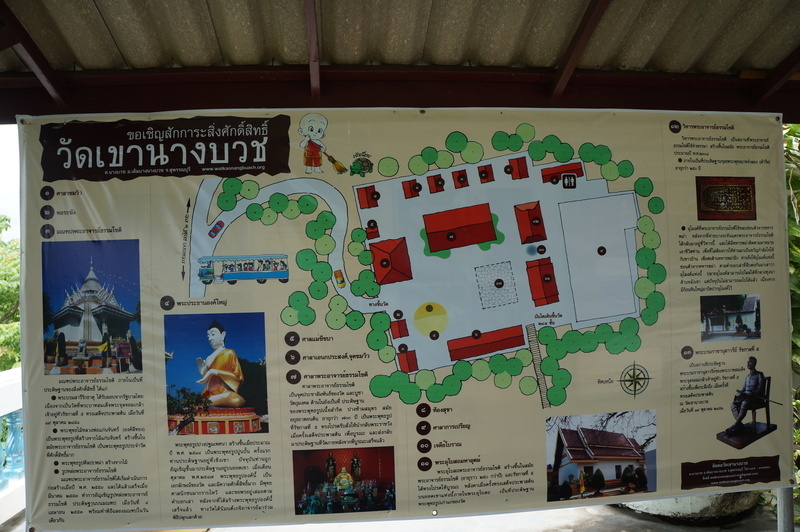 It was all in Thai script, except for the last text in the bottom right corner, which gave the address for their website.  http://www.watkaonangbuach.org/

In reading their website, it looks like construction started on their temple in the Buddhist year 2551 and completed in March 2553, which would have been March 2010 by our western calendar. And they've likely been adding things ever since, just like the current work on the staircase.

We were right that the narrow road did lead to a small parking lot on the summit. While we were there a tourist van arrived and about eight people got out to explore the wat. But we saw none of the giant tourist buses that bring large crowds to the most well-known sites in Thailand. Very unlikely that this one is in any guide book, which is just fine with me. Google the name of the wat and you get no Wikipedia page, but a few hits from some tourism websites, mostly copying the same text from some single source, with a few pictures, but no pictures of the view and certainly no videos of the view, as we provide here. The wat's own website doesn't even turn up in the first ten pages of Google results, even though it is a very nice website. I suppose this is because they picked a domain name that is spelled slightly differently from the name of the wat. I never would have found it, if I hadn't found that sign on the summit with the website address.

At this time the wat's own website has 29 photo albums with a total of over 1,800 pictures, documenting their many activities at the wat, as well as the help they have provided to various communities with flood relief efforts. The album titled Atmosphere contains nine pictures of the surrounding fields and there is one other picture in all the other albums that shows a bit of the view in the background of the picture. I didn't find any videos on their website.

So for now, see videos of the magnificant view here and only here.

I will also point out that their Home page has a slide show that cycles through a number of nice images at the top of the page. Included in those is one that shows a very large Buddha at the foot of the mountain with a long line of monks walking towards it and the wat seen on the mountaintop above. This large Buddha does not yet exist. I suppose it is part of their future plans.

If you click on the photo of the staircase on their website, you'll be taken to a page that documents their donation drive for the restoration of the steps, the project which we saw is now in progress.

As I have contemplated this notion of the monks having the best view in town, I began to take what I originally thought of as a joke a little more seriously. Suphan Buri means City of Gold, and Paula told me it is an appropriate name, as she described it as a "rich people's town." One time we were there on a Wednesday afternoon around 2:00 pm and we stopped in for some shopping at a very upscale looking mall. I looked around and saw the lot was quite crowded, with many new cars and trucks, including some expensive brands, like Mercedes and BMW. I commented to Paula at the time that only a rich people's town would have so many people who could afford to go shopping in the early afternoon on a Wednesday.


I then thought about Nang Buat mountain, which is only 50 km or so from the heart of that city. I'm pretty sure it has one of the best views anywhere near that city. If this were America, my guess is that Nang Buat mountain would be owned by one of those rich people and you'd need to be a friend of that person to ever see that view. Instead, there is a wat there and from what I have seen, all wats in Thailand are always open to the public, with a small admission fee at a few, but most of them completely free. So the monks might have it pretty good, but they also freely share their wealth with the public. So anyone can see that view, which in my mind, is a whole lot more equitable utilization of such a scarce and valuable resource.